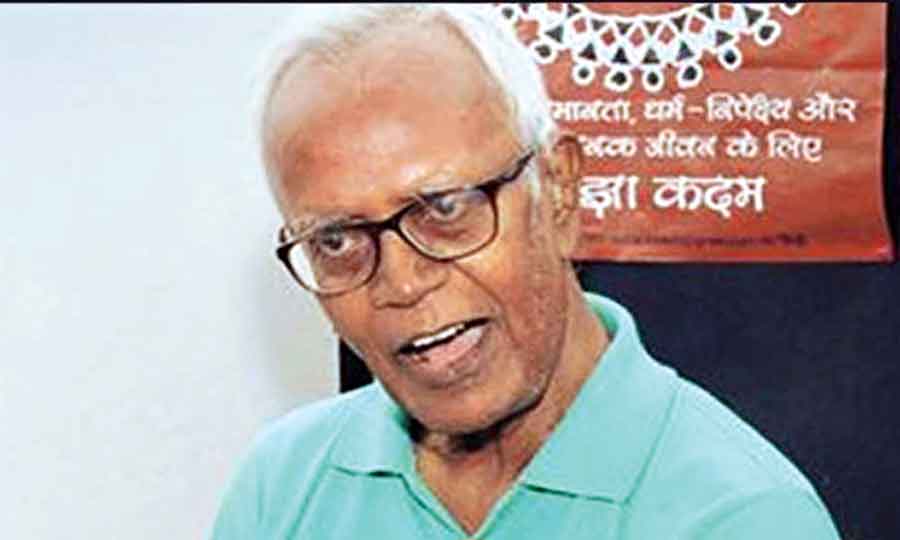 Guwahati-based social scientist Father Walter Fernandes on Wednesday said the arrest of tribal rights advocate Father Stan Swamy from Ranchi had “implications” for the Northeast, which too had witnessed arrests of rights activists and the displacement of tribal communities in the name of development.

“What has happened (displacement and impoverishment) to the tribes in Jharkhand, Chhattisgarh and Odisha, on whose side Stan Swamy was struggling, can reach the Northeast too because of mining, oil exploration, roads, dams and defence projects, especially in Arunachal Pradesh, Assam and Meghalaya,” Fr Fernandes, 81, a long-time associate of Fr Swamy, said.

“Making matters much worse will be policies such as the draft Environment Impact Assessment (EIA) Notification, 2020, a sure disaster for the Northeast.”

Fr Fernandes is director of the North Eastern Social Research Centre (NESRC), Guwahati, which he founded in 2000, and former director of the Indian Social Institute, Delhi. The NESRC’s mandate is to be a centre “combining” serious intellectual pursuits with the involvement of persons and groups “active” in social change in the region.

Father Swamy was arrested by the National Investigation Agency in the Bhima Koregaon case, in which several rights activists, writers and lawyers have been linked to Maoists and put behind bars.

Fr Fernandes told The Telegraph the NESRC’s studies had shown that tribal communities, who make up 12.9 per cent of Assam’s population, account for more than 40 per cent of the 19.2 lakh people deprived of sustenance in the state “in the name of development”.

Fr Fernandes referred to the arrests of human rights activists such as Jiten Yumnam (Manipur), Lachit Bordoloi and Akhil Gogoi (both Assam), ostensibly for demanding protection for their people and the marginalised.

He said the continued enforcement of the Armed Forces (Special Powers) Act, issuance of the draft EIA Notification 2020 and the enactment of the Citizenship Amendment Act (CAA) were “glaring” examples of human rights violations in the region.

There have been protests in Assam against the EIA Notification 2020 and the CAA, whose easing of citizenship rules is seen as a threat to the identity and culture of the people of the Northeast. Gogoi has been in jail since December over his alleged role in the violence during the anti-CAA protests.

Activists believe the draft EIA Notification 2020 will harm the Northeast’s interests, especially since it allows post-facto clearance of projects in eco-sensitive zones, among others.

“It is important for human rights activists of the Northeast to demand that all those arrested in the region and elsewhere be released forthwith,” Fr Fernandes said.“The Constitution seems to be a threat to the ruling powers; so those who want its provisions to be implemented have to be punished. That has implications for the Northeast too.”

Fr Fernandes said he had known Fr Swamy for four decades and had worked closely with him for more than 20 years.

“I have seen his total commitment to the cause of the tribes, Dalits and other marginalised communities. He encouraged them (to agitate peacefully) but applied the brakes wherever he saw the possibility of violence,” Fr Fernandes said.

On the Bhima Koregaon case, he said: “That most of the accused have never been to Bhima Koregaon or that they have not been in touch with each other is irrelevant to the government or its intelligence agencies. (What’s) of importance (to the government) is to punish people who question injustice or demand justice for the marginalised.”