Both the patients had attended Delhi event 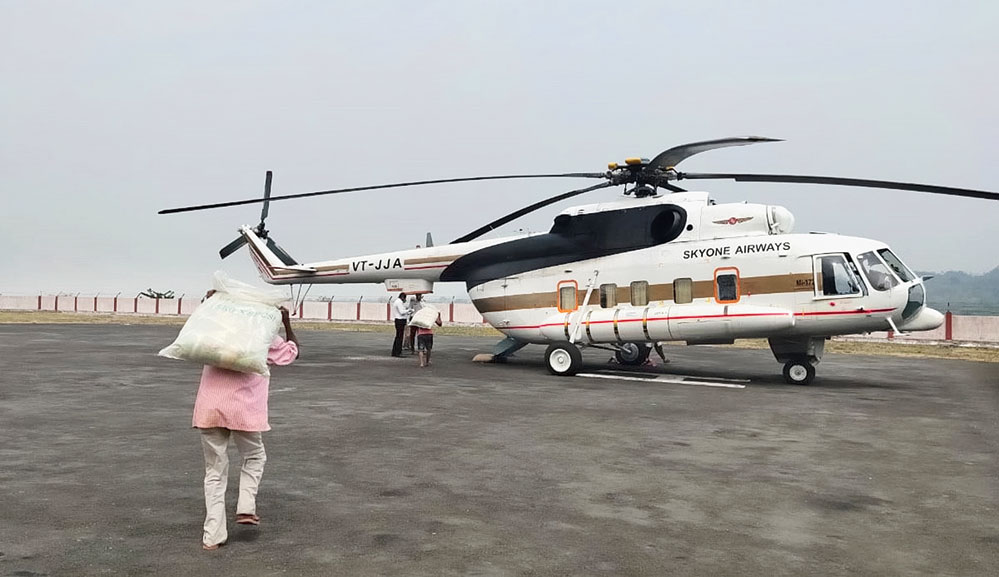 A worker transfers sacks of grains from a vehicle to a chopper for distribution at Miao in Changlang district on Thursday.
(PTI)
Damien Lepcha And Brozendra Ningomba   |   Itanagar   |   Published 02.04.20, 08:51 PM

Arunachal Pradesh became the fourth northeastern state to join the country’s coronavirus map on Thursday with a man from Medo in Lohit district testing positive.

The total Covid-19 cases in the region have soared to 20 in the past 24 hours. All have travel history.

Arunachal joined the list on Thursday, the day Manipur registered its second case after a 31-year-old man tested positive for Covid-19. Both had attended a religious congregation in New Delhi.

Health officials in Itanagar said the man’s swab sample was sent to the Regional Medical Research Centre at Dibrugarh in Assam and the report was positive. The man is not an Arunachalee but resides at Medo in Lohit district, 377km from the state capital. His condition is stable.

After news of the state’s first positive case surfaced, police in Itanagar traced another 12 people who had attended the event. Four of them were traced to Itanagar, two to Naharlagun, one to Nirjuli and five to Laluk in North Lakhimpur district of Assam. They were sent to Tomo Riba Institute of Health and Medical Sciences for tests. Earlier, six persons from Namsai district who had attended the event had tested negative.

“The patient, who is asymptomatic as of now, has been kept in a special isolation room in Tezu zonal hospital. All his family members, primary and secondary contacts have been quarantined,” Lohit deputy commissioner Prince Dhawan said. As a precautionary measure, the administration has imposed a 24-hour curfew under Section 144 of the CrPC in the Medo area.

Later in the day, chief minister Pema Khandu reviewed the state’s preparedness level to tackle the Covid-19 pandemic. He requested police to keep vigil on the inter-state boundary with Assam and strictly monitor all the 22 official entry gates. He also requested the masses to strictly adhere to social distancing and follow all safety guidelines.

In Manipur, a 53-year-old man from Lilong in Thoubal district has tested positive, taking the state’s confirmed Covid-19 cases to two. He has been undergoing treatment at the Regional Institute of Medical Sciences hospital since the last few days. Before he was admitted to RIMS, he underwent treatment for fever and diabetes at a little known Peace Hospital and Research Institute on Porompat Muslim Road in Imphal East. He was admitted to Peace Hospital on March 20 and discharged on March 22. He tested positive at RIMS late last night.

State health services spokesperson Dr Sasheekumar said 10 members of the patient’s family and two guides are in quarantine at RIMS, all others he came in contact with during the past two weeks are being traced and containment measures have been taken up in his locality. Chief minister N. Biren Singh tweeted: “Very sad and alert. In Manipur too one more #COVID-19 positive case who joined #TablighiJamaat congregation at #Nizamuddin Markaz. Now in Manipur #COVID-19 positive are two. Some are under quarantine centres for observation.”