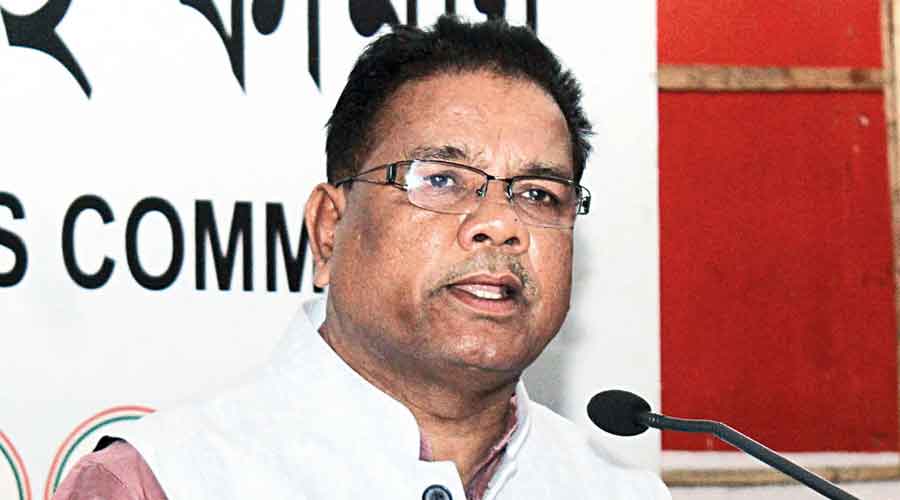 The Opposition Congress on Wednesday not only accused Assam chief minister Sarbananda Sonowal of being “directly involved” in the question paper leak case but also used a protest here to reach out to the “disgruntled” youths whose future was being “compromised” by the incumbent government.

Assam PCC chief Ripun Bora levelled the accusation against Sonowal during a protest against the cop recruitment scam at the Manabendra Sarma complex here. Hundreds of Congress members participated in the protest which was cut short by security personnel.

“The chief minister is directly involved in the case, based on facts and reports. There cannot be an impartial probe if he is there. Therefore, we want his resignation and a probe by a sitting high court judge. We will continue to protest till our demands are met,” Bora said.

He said he was also against an inquiry by the CBI because it was in the hands of the government.

At the start of the protest, the PCC chief released a bunch of black balloons inscribed with the words “nibanuwa murkhuwa (headache for the unemployed) Sarbananda Sonowal resign as CM”.

Later, Bora urged the unemployed youths to come out and protest as their future was being allegedly compromised by the state government.

The Congress has called another protest on October 5 in all the district headquarters where the offices of the superintendents of police will be the gheraoed.

Party spokesperson Imdad Hussain told The Telegraph, “The youths are most affected and disgruntled because of the government’s inability to hold any exam without hitch and lack of jobs. Aren’t their futures being compromised? As a political party we have to look into such issues and flag them appropriately.”

There are over 18 lakh educated unemployed youth in the state.

Apart from targeting Sonowal, Bora also targeted the police department, BJP legislators whose names have cropped for holding mock tests for the sub-inspector exam without naming them, former chairman of the state level police recruitment board, Pradeep Kumar, and officer on special duty (Ranjit Mazumder) to the chief minister, who has been allegedly appointed by the RSS for “saffronisation” of the government.

He also displayed the photographs of BJP youth leader Diban Deka, a suspect in the paper leak case who is absconding, with senior BJP leaders such as Ram Madhav, Siddhartha Bhattacharya and MLA Bhaskar Sarma and Phanindra Sarma, to counter them denying any link with Deka. The recruitment of Deka’s wife in the publicity department was also raised by Bora. Deka is likely to surrender any moment, sources said.

Bora condemned the police for “using” force to thwart their democratic protest, allegedly injuring a few Congress members who tried to march to Dispur.

Sonowal told mediapersons on the sidelines of an official function here that “in sync with the state government’s principle of zero-tolerance against corruption, no leniency or compromise would be tolerated” in the inquiry process. He said the new recruitment board has been constituted with a mandate to see that no meritorious student is deprived of his or her right.

He also maintained that the inquiry ordered was not the result of any complaint.

“Within 15 minutes of the reported leak of question papers, state government has cancelled the examination of the recruitment... for the first time any government acted so expeditiously and transparently to institute an inquiry to disclose the reasons responsible for the alleged scam,” Sonowal said.

So far 21 people have been arrested in the case since September 20, including one by the CID on Wednesday. The arrested is a close aide of former DIG Dutta. The CID, which is probing the case along with Guwahati police’s crime branch, is also “preserving the crime scene” in the two hotels where the mock test for the exam was held and candidates stayed.