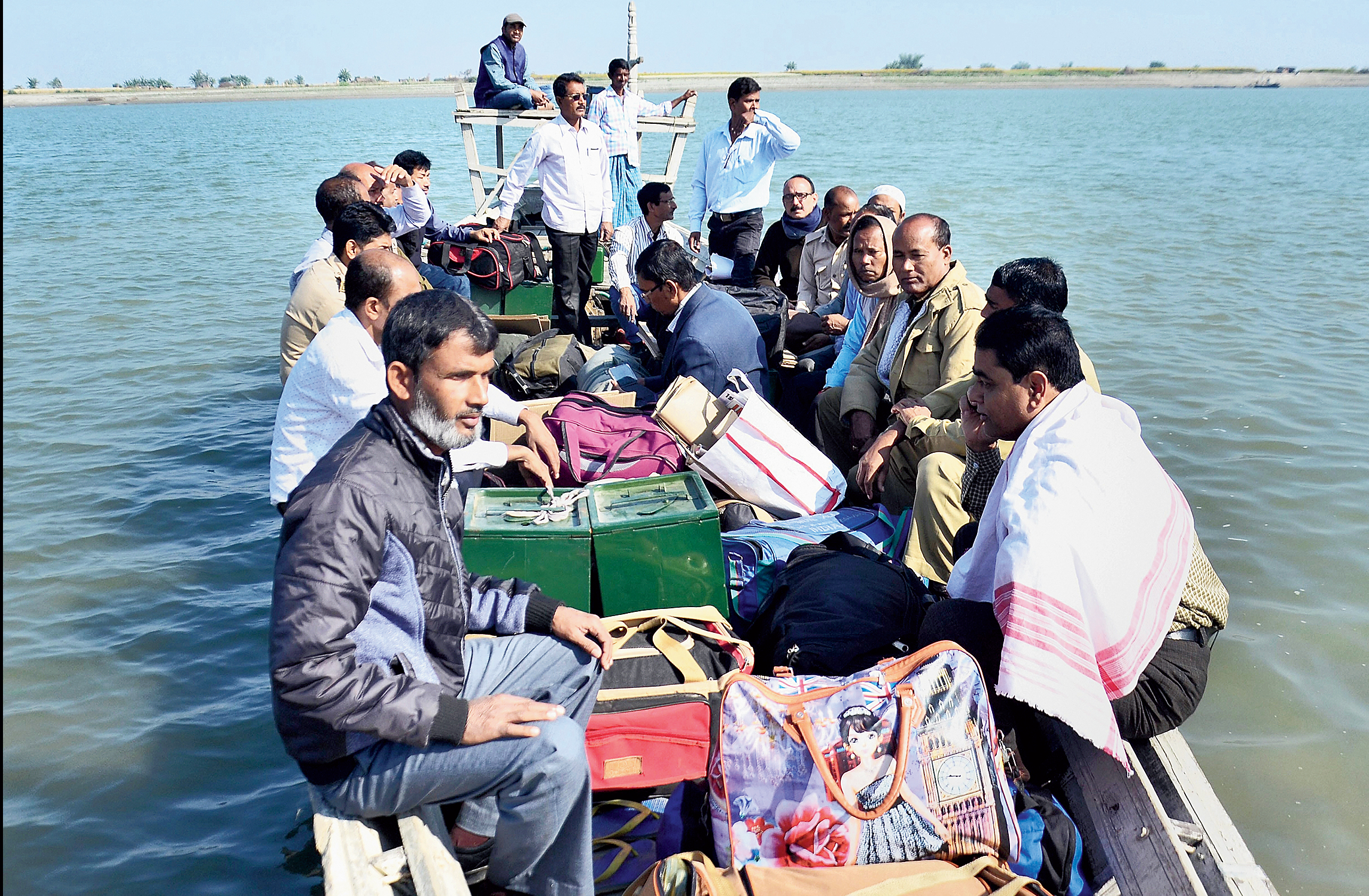 Poll officials leave by boat from Goroimari in Kamrup on Tuesday, the eve of the first phase of panchayat elections.
PTI
Our Special Correspondent   |   Guwahati   |   Published 04.12.18, 06:34 PM

The stage is set for the first phase of panchayat polls on Wednesday, a vote which will to some extent throw light on the “health” of the ruling coalition in Assam with the AGP and the BJP contesting separately and also the “impact” of the Citizenship (Amendment) Bill, 2016, at the grassroots.

Though the AGP is a constituent of the state government, it is contesting the panchayat elections alone after the bill strained its ties with the BJP, among others.

Though local issues dominate rural polls, political analyst Arupjyoti Choudhury told The Telegraph that the keen contest could throw light on the health of the ruling alliance and the impact the proposed legislation will have on voters at the grassroots.

All the major political parties have made the bill an election issue during campaigning with the BJP staunchly supporting it while the AGP, the Congress and the AIUDF have opposed it vehemently.

Both the BJP and the AGP, engaged in a biter battle during the campaign, are silent when asked about the impact of their move on the alliance.

However, BJP spokesperson Rupam Goswami asserted it would emerge as the leading party and people will “expose” the “unholy nexus” between the Congress and the AGP.

Congress spokesperson Rhituparna Konwar said it is gaining and this will be reflected in the vote share and the number of zilla parishads it will bag because people have “seen through” the ruling alliance. The Congress, which has suffered a series of setbacks since 2016, expects to gain from the division of votes between the AGP and the BJP.

The polls, therefore, will be a huge test for PCC president Ripun Bora, BJP president Ranjeet Kumar Dass and AGP chief Atul Bora, leading their parties for the first time in the rural polls, just months ahead of the Lok Sabha elections.

Another highlight is the participation of the Trinamul Congress in the polls, with the objective of expanding its organisational base in Assam. It has fielded 180 candidates in Barpeta, Goalpara, Dhubri, Sonitpur, Nalbari, Hojai, Cachar, Hailakandi and Kamrup districts.

Though counting of votes will be held on December 12, 734 candidates have been declared elected uncontested, including 442 in the first phase and 292 in the second phase.

State election commissioner H.N. Bora said security has been beefed up for smooth polls. The commission has banned exit polls till after polling on December 9 and declared a holiday on Wednesday in the 16 districts.

The second phase of polling will be held in 10 districts on December 9.

Vehicle torched: A Tata Sumo of Matia zilla parishad AIUDF candidate Sujaya Sangma was torched on Monday night. An FIR was lodged in Matia police station alleging that her opponents had set the vehicle on fire. An anchalik panchayat AIUDF candidate from Sidhabari in East Goalpara Kabita Sangma also alleged that miscreants tried to set her house on fire.