Christian-dominated Mizoram continues to simmer over the proposed legislation 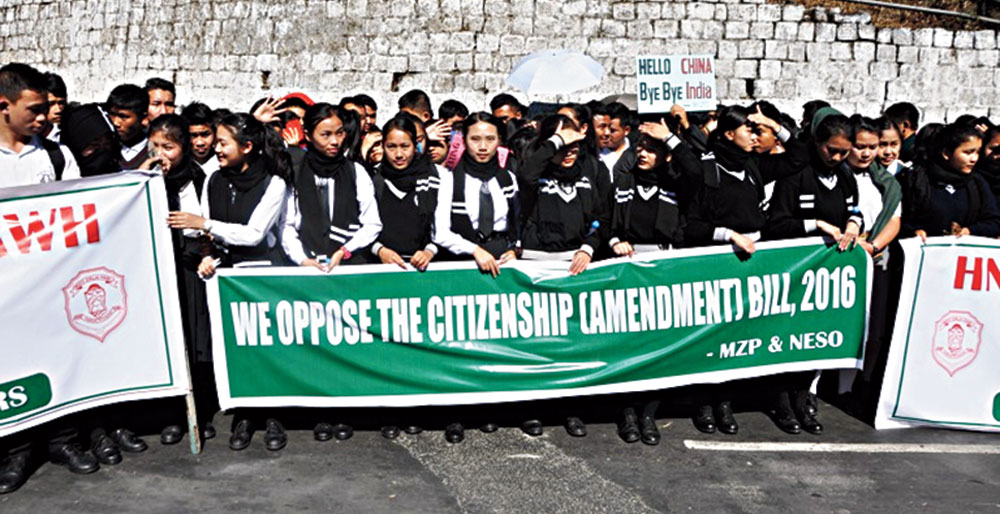 So much so that issues like liquor prohibition and Bru refugees, which dominated the November 2018 Assembly election and helped the Mizo National Front, headed by Zoramthanga, sweep the polls, have paled in comparison to the bill in the run-up to the Lok Sabha elections and Assembly bypoll on April 11.

Northeastern states had witnessed massive protests against the bill which envisages citizenship to non-Muslims from Pakistan, Bangladesh and Afghanistan, who entered India by December 2014. The Centre passed the bill in the Lok Sabha but did not introduce it in the Rajya Sabha for want of numbers to push it through.

However, the recent declaration by BJP president Amit Shah to re-introduce the bill, if the party retains power, has not only heightened the sense of fear in Mizoram but has also developed a sense of “being neglected” by the Centre.

Lallianchhunga, a professor of political science at Mizoram University, said, “The Centre’s decision not to push the bill in Rajya Sabha was hailed as a historic win for the Northeast. If Shah had not said his party would re-introduce the bill if voted to power, it would not have been a poll issue in Mizoram,” he said.

For a predominantly tribal state with a population of just over 11 lakh and sharingborders with Bangladesh and Myanmar, influx has been an important issue over decades, especially the fear of assimilation of outsiders with indigenous Mizos, who constitute 87 per cent of the population.

After the Centre passed the bill in the Lok Sabha on January 8, thousands hit the streets in Aizawl responding to a call by Mizo Zirlai Pawl, the apex student union, on January 23.

The Assam Rifles ground at Lammual too wore a deserted look on Republic Day owing to a boycott call by the NGO Coordination Committee, a conglomerate of major civil society groups and student associations. The mass prayers organised by churches across the state on February 16 also reflected the fear and distrust over the bill.

Political analyst John V.L. feels the bill will be the main poll plank in Mizoram because xenophobia of influx and fear of outsiders is at its peak.

The bill, most political analysts feel, is likely to dent the prospects of the MNF because it is a part of the BJP-led North East Democratic Alliance though it asserts it has no truck with the BJP in the state.

The MNF has said it would pull out of Neda if the Centre re-introduces the bill. The BJP is contesting the lone Lok Sabha seat in Mizoram.

Senior political analyst Lalvenhima Hmar said, “The bill united the entire Northeast. If the BJP and its allies, including the MNF, fail to achieve their seat target in the region, there will be no other reason but the bill to blame.”

Six candidates are in the fray but the key contest is likely to be between the MNF and the ZPM-Congress combine, which has flagged the “defeat” of the bill in Parliament as its main poll plank. It has appealed to the people to vote for the alliance candidate for the safety of the people of Mizoram and their religion.

Clearly a lot is at play in these polls.