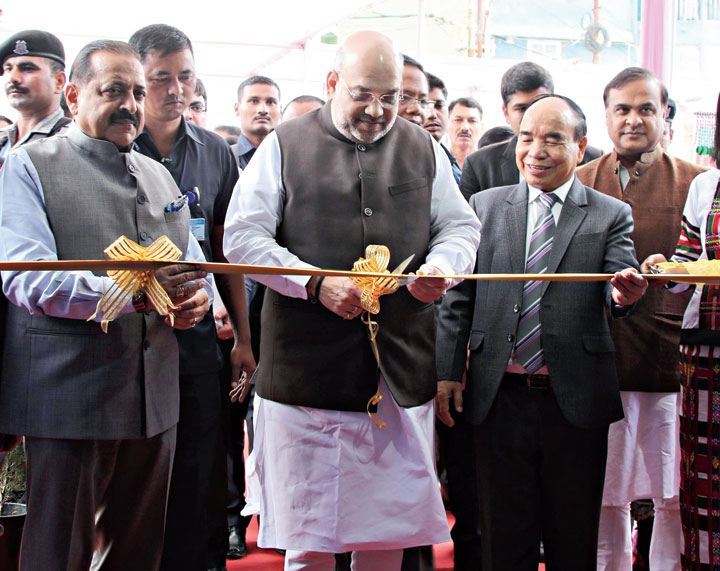 Union home minister Amit Shah on Saturday held a meeting with civil society organisations of Mizoram during which he told them that the Centre was firm on reintroducing the Citizenship (Amendment) Bill.

The secretary of the Coordination Committee, an NGO, Lalhamchhuana, said they had submitted a memorandum to Shah on the bill and the ensuing Bru repatriation.

“Shah assured us to take measure to include a proviso in the bill to strengthen the existing (inner line permit) ILP system to check illegal influx and ensure that Mizoram is not affected by the bill,” he said.

Lalhamchhuana added the Union minister had promised that the ILP would be included in the draft citizenship bill, which would be discussed with all the stakeholders before it is laid in Parliament.

Shah said the NDA government at the Centre had accelerated the pace of development in Mizoram.

He said, “Once affected by insurgency, Mizoram today is known for its progress and stands as the symbol of peace and brotherhood not only in India but across the world.”

He said the handloom and handicraft sector had immense potential in the Northeast and could generate huge employment opportunities and augment economy.

Shah highlighted the various development projects in Mizoram undertaken by the Centre, like the 60MW Tuirial hydroelectric power project which was inaugurated in 2017, housing assistance to more than 21,000 people and LPG connections to more than 2,300 BPL families.

He said Mizoram would be connected by broad-gauge railways by 2021 and a 1,700km national highway would be constructed.

The Mizoram People’s Conference (MPC) and the People’s Representation for Identity and Status of Mizoram (Prism) staged a demonstration in protest against the proposed citizenship bill during Shah’s visit.