The MHA had discontinued its allowances, including ration supplies and cash dole, to the Bru refugees from September 30 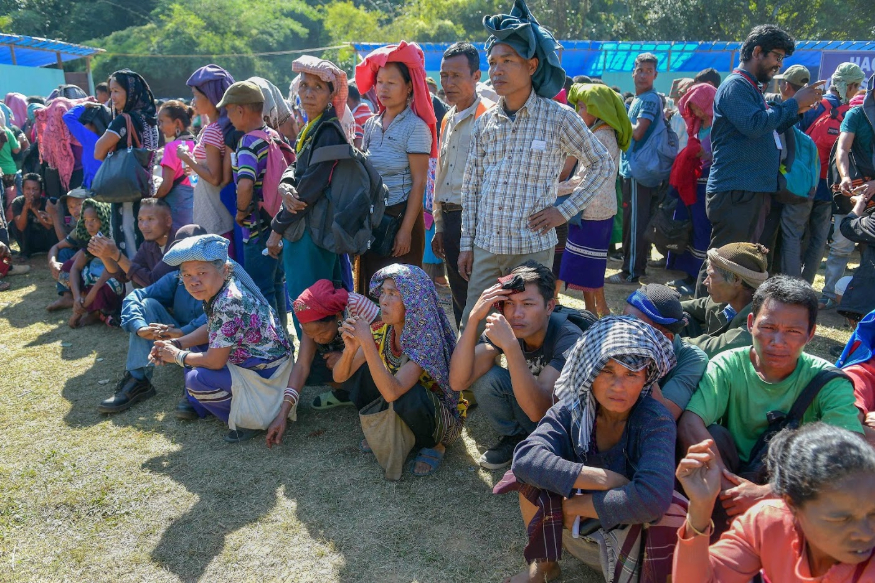 Bru refugees lodged in relief camps in Tripura have urged the Centre to restart its subsistence allowances, days before the Tripura government puts an end to the free ration supply to the displaced people.

The Ministry of Home Affairs (MHA) had discontinued its allowances, including ration supplies and cash dole, to the Bru refugees from September 30.

However, following claims of starvation deaths of six people in the refugee camps and over a week-long road blockade by the displaced families, the state government decided upon providing free ration to them earlier this month.

'The Tripura government would supply the free ration to the Brus till November 30 and it is unclear whether it will be continued beyond that date,' official sources said.

Altogether 4,447 displaced Bru families, lodged in relief camps at Kanchanpur and Panisagar sub-divisions of North Tripura district, are scheduled to return to neighbouring Mizoram from where they started fleeing since 1997 following ethnic clashes.

The ninth and 'final' round of the repatriation process of the Bru refugees will come to an end on November 30.

The Mizoram Bru Displaced People's Forum (MBDPF), in a communication to the Centre on Monday, demanded resumption of the subsistence allowances.

The displaced Brus would not agree to be repatriated to Mizoram 'until and unless their small and simple demands are fulfilled,' the MBDPF said in a letter to A P Maheshawari, Special Secretary (Internal Security), Ministry of Home Affairs.

The MBDPF also said that the Bru refugees would 'take initiatives with all their might' to meet the challenges for conclusion of the long-pending displacement issue.

'We strongly believed that the chapter of displaced Brus would be closed down as soon as possible in one way or the other,' the letter said.

A total of 1,020 Bru refugees belonging to 252 families have returned to Mizoram during the ninth round of the repatriation process that commenced on October 3, officials said.

The vexed Bru issue started from September, 1997, following demands of a separate autonomous district council by carving out areas of western Mizoram adjoining Bangladesh and Tripura.

The situation was aggravated by the murder of a forest guard in the Dampa Tiger Reserve in western Mizoram by Bru National Liberation Front insurgents on October 21 that year.

The first attempt to repatriate the Brus from Tripura was made in November 2009.