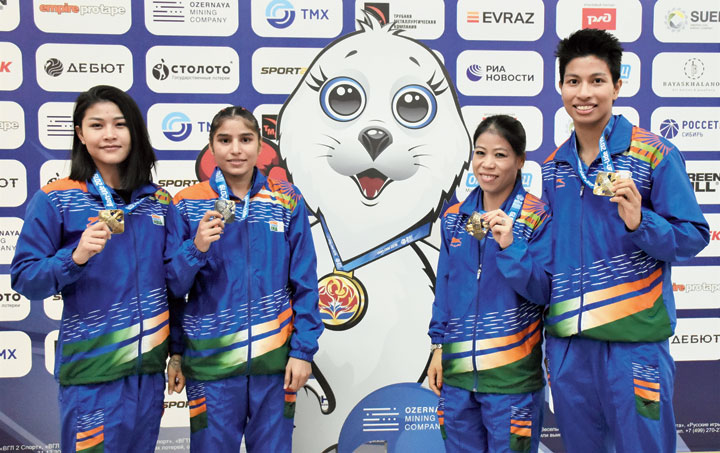 The 22-year-old pugilist from Assam’s Sonitpur district won bronze in the 54kg category in her maiden world championship in Russia recently.

“Yes, it is for them (coaches). They have helped me achieve whatever I have done. They have worked hard not only with the medal winners but all boxers in the squad. All the pugilists tried hard. I would like to thank and dedicate the medal to them. Raffaele Bergamasco and (Mohammed) Ali Qamar have worked really hard,” Jamuna told The Telegraph over phone from New Delhi.

She lost 5-0 to Huang Hsiao-Wen of Taiwan in the semi-final. Mary Kom, Lovlina Borgohain and Manju Rani also won medals in the world championship.

“I would have been much happier had I won gold. I was pretty sure of gold if I could have defeated Huang. But I’m more confident now and looking forward to upcoming events,” Jamuna said.

On her semi-final bout, Jamuna said, “I have never played against a taller opponent. I applied all my weapons but she took advantage of her height and stayed away from getting hit. The tactics I used didn’t work and I had to be content with the bronze. I will work on fighting a taller opponent.”

Jamuna is now eyeing the Olympic qualifiers in China in February next year. She said she needs to work hard, especially on strength training as she wants to change her weight category. “I’m planning to shift to 57kg for my Olympic debut. Obviously, there will be stronger and taller boxers in that category. I now need to work hard with more power and strength training with my coaches and support staff. I’m confident of doing well in the new category as well,” Jamuna, who won gold at the 2nd India Open Boxing Tournament in Guwahati, said.

She shared the good news with her mother Nirmali Boro at Belsiri village in Sonitpur district. “I spoke to her after the bout and she was happy to know I have won a medal. I hope to see her soon,” she said.

Jamuna had always loved sports and started practising wushu at a tender age, before shifting to boxing. It was difficult to pursue her dream because of poor financial background but her mother did everything she could to help her achieve her dream.