Bring on the brollies as well as winterwear 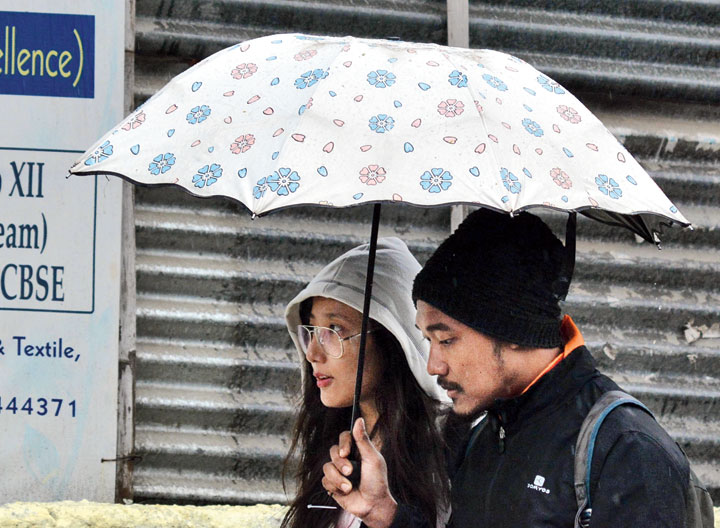 Intermittent showers since early morning forced people to bundle themselves in heavy woollens.

It was a day to flaunt those colourful mufflers and scarves while those wearing hoodies did not let their hoods down. School and college-going children and youth had a tough time heading for their institutions, what with examinations, rain and all.

Diganta Gogoi, father of a class V student of Don Bosco school here told The Telegraph, “I took my son Rahul to school on my bike and I had a rough time today as it was drizzling in the morning. I had to reach on time as my son’s exams started today and we made him wear a waterproof jacket and wrapped him with a woollen muffler so that he doesn’t catch a cold.”

The number of vehicles on the roads was less although cars outnumbered two-wheelers as those with a choice chose to take the closed four-wheeler out.

Shopkeepers in the usually busy Fancy Bazar, the commercial hub here, were ruing the cold weather as the area was deserted by late evening. “We were having a bad time since all the trouble began. All the protests and strikes have led to a decrease in our business. This is usually the season for good business but this time we are forced to close our shops early as there are no shoppers around. The weather today has made it even worse. I could make bohoni (opening sale) in the evening only,” said Ashutosh Das, owner of a small shop selling toiletries and cosmetics in Fancy Bazar.

A chill wind blowing throughout the day only compounded matters. It was not unusual to see people warming themselves at small fires lit by the roadside.

Those who could afford it chose to spend the day at home.