The Opposition could win only five wards — CPM three, Trinamul one and Tipra Motha one 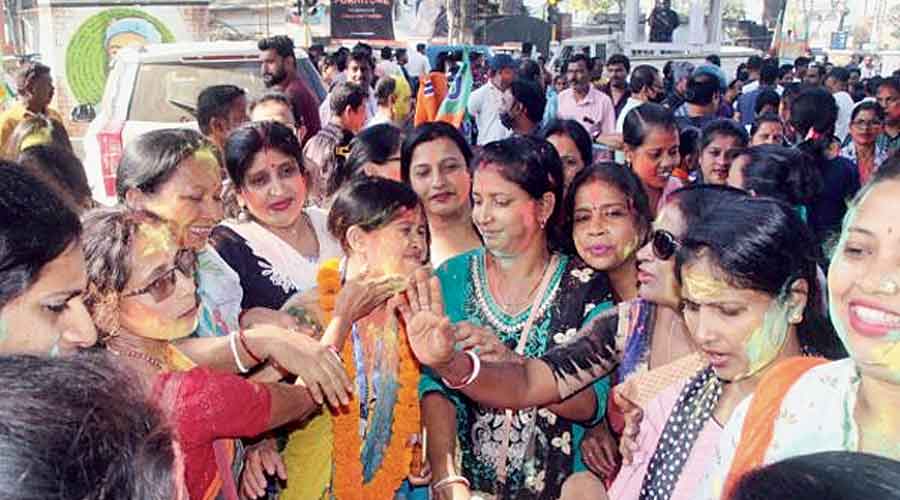 The ruling BJP has won 217 of 222 wards at 14 urban bodies that went to the polls in Tripura on Thursday.

While the Trinamul Congress attributed the verdict to rigging and intimidation, the BJP said it was a vote against those who allegedly tried to defame the state.

The Opposition could win only five wards — CPM three, Trinamul one and Tipra Motha one. The Congress drew a blank in the results which were declared on Sunday. Trinamul and the Tipra Motha won one seat each at the Ambassa municipality in Dhalai district. The CPM bagged one seat each in Ambassa, Panisagar and Kailashar.

Sunday’s massive win will see the BJP control all 20 urban bodies in Tripura. The party had already won all wards at six urban bodies uncontested. Overall, the BJP has won 329 of the 334 wards under the 20 bodies spread across eight districts of the state.

The BJP has won all 51 seats at the Agartala Municipal Corporation where Trinamul came second and the CPM third in terms of vote share. However, the BJP’s margin was more than the combined votes of the two parties. This is also the first time the AMC is without Opposition, the BJP said. The Left Front had bagged 45 of the 49 seats in 2015.

Tripura chief minister Biplab Kumar Deb described the mandate as historic, a victory of the state’s culture and its people.

“We have won about 99 per cent of the seats. People of Tripura have said what they want and which direction they want to take. The verdict is also an answer to those who wanted to malign Tripura. The mandate is that the people of Tripura, minority or majority, want development and want to live together. It is a people’s government and people have responded... they have given a fitting reply,” Deb said, without referring to any party and individual.

Baptu Chakraborty, Trinamul’s youth wing leader, said: “We have almost secured second position in terms of vote share in just three months. In Agartala, we have done well. It gives us hope.”

Trinamul general secretary Abhishek Banerjee tweeted: “Tripura this is only the beginning! We thank the people of Tripura and Maa Tripureshwari for blessing us abundantly. Despite rigging, threats, violence - we stand firmly as the strongest Opposition in the state. Your RUTHLESS ANARCHY will soon come to an end @BjpBiplab! Keep watching.”

The CPM said the result was along expected lines. “The State Election Commission, the ruling BJP and the state machinery, especially police, scripted the manuscript of the polls. The result will be a black spot in Tripura’s electoral history. People will now have to share more responsibility to restore democracy and right of the people,” CPM state secretary Jitendra Chaudhury said.