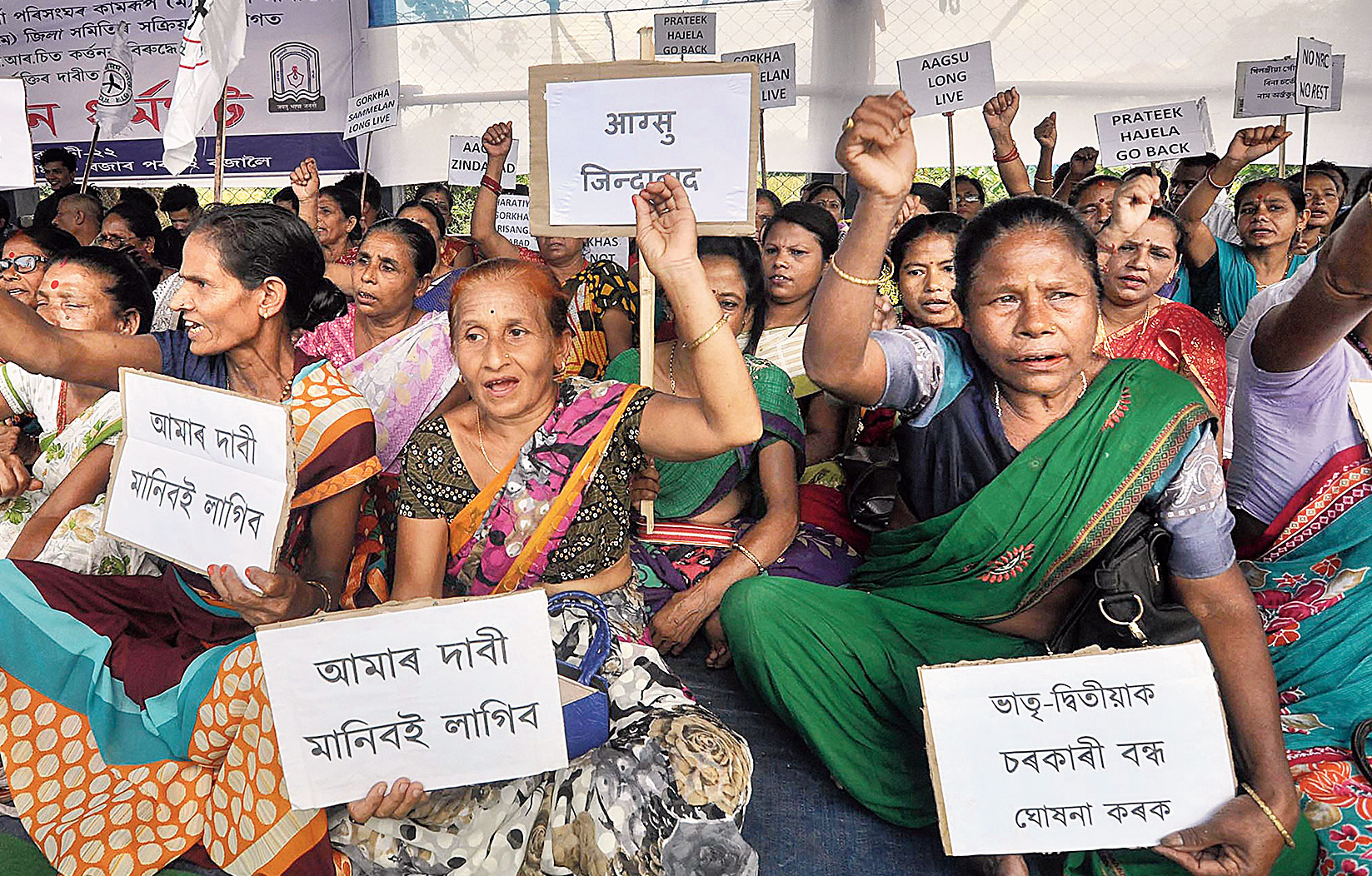 All Assam Gorkha Students’ Union activists stage a protest against the exclusion of their names from the final NRC in Guwahati on Friday.
PTI
Rokibuz Zaman   |   Guwahati   |   Published 27.09.19, 11:29 PM

The All Assam Bengali Youth Students’ Federation on Friday demanded that state finance minister Himanta Biswa Sarma be made the chief minister of Assam because he would be able to protect the “insecure Bengali Hindu community”.

“We are unhappy with the National Register of Citizens (NRC). Over 19 lakh people have been excluded from the final list but chief minister Sarbananda Sonowal has not given any clarification on this. The home department, which is under Sonowal, is a complete failure,” the federation’s president, Deepak Dey, told The Telegraph.

Altogether 19.06 lakh applicants in Assam did not make it to the final NRC published on August 31.

“Over 800 people, a majority of whom are Hindu Bengalis, have been sent to detention camps after this government came to power in 2016. The BJP has come to power on the promise of protecting Hindus but in the name of NRC and doubtful-voters, they are harassing Indian Hindus,” Dey said. “On September 7, 2015, the Centre had issued a notification on the implementation of the Passport Act, 1920, and the Foreigners Act, 1946. These have been implemented in all the states of India except Assam. We sought a reply from the government but didn’t receive a response,” he added.

According to Dey, Sarma will be able to protect the Bengali community. “Sarma is more vocal about issues concerning the people. He at least addresses the people and expresses discontentment over issues. We have seen him speaking on NRC-related issues. We can see that he understands the emotions of the people. So, we want him as the CM,” he said.

The federation, however, is not in favour of the Citizenship Amendment Bill. “We are Indians, that’s why we applied for the NRC. If a family has five members, three are found to be included and two excluded. There are flaws in the NRC which should be rectified. The verification should be done at NRC seva kendras,” Dey said.

He said Hindu Bengalis voted for the BJP for protection and development and not to see these “dark days”.

When The Telegraph contacted the BJP state unit for comments, party sources said they already have a chief minister and would not comment on what a particular organisation wants.

At Kokrajhar district headquarters in lower Assam, the federation staged a two-hour sit-in near the deputy commissioner’s office to demand inclusion of Hindu Bengalis left out of the final NRC.

More than a hundred members of the federation and Hindu Bengalis of the district participated in the demonstration, chanted slogans and displayed placards and banners.

The protesters submitted a memorandum to Kokrajhar deputy commissioner Partha Pratim Mazumdar, a copy of which was sent to the Assam chief minister.

The president of the federation’s BTAD (Bodoland Territorial Areas District) region, Rajib Sarkar, who participated in the demonstration, said about 12 lakh Hindu Bengalis had been excluded from the NRC and demanded that their names be included in the NRC unconditionally.

The organisation’s leaders threatened to launch a massive democratic agitation unless their demands are fulfilled.

The All Assam Gorkha Students Union, Gorkha Sanmilan and Gorkha Women Wing on Friday staged a demonstration in front of the Goalpara deputy commissioner's office against the non-inclusion of nealry 1 lakh Gorkha people in the final NRC.