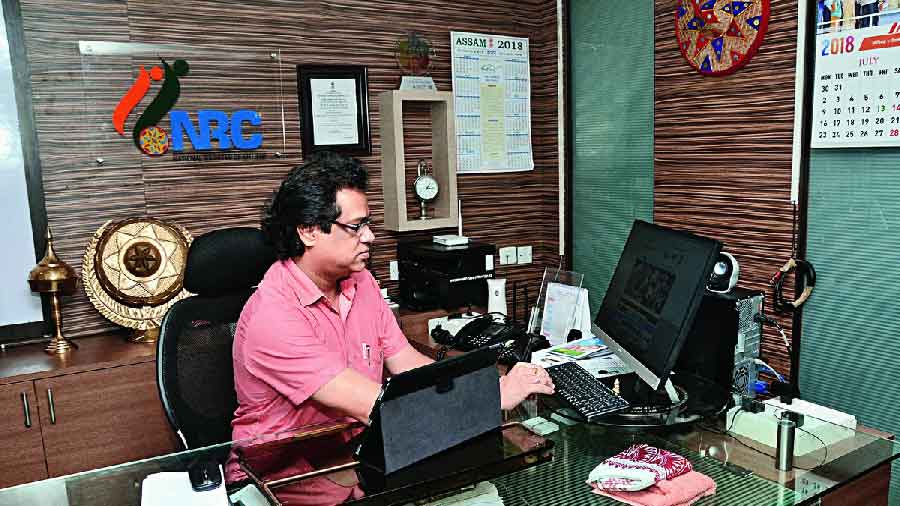 The Assam coordinator for the National Register of Citizens, Hitesh Dev Sarma, has complained to the state CID seeking an inquiry against his predecessor Prateek Hajela and around 200 other officials and data entry operators for “facilitating” the inclusion of ineligible people in the updated register.

Sarma’s complaint says he suspects Hajela of “intentionally” avoiding a “mandatory” quality check by “ordering use of a software which prevented” such a check and facilitating the inclusion of foreigners in the NRC. It adds that this can be “seen as an anti-national act affecting the national security”.

Calls and WhatsApp messages to Hajela’s number went unanswered. Sarma lodged his six-page complaint on May 19 with the superintendent of police (CID) in Guwahati, requesting the registration of cases under Indian Penal Code Sections 120B, 166A, 167, 181, 218, 420, 466 and 24 against Hajela and the others.

An official of the CID, which is a branch of the Assam police, confirmed the receipt of the complaint when asked whether any case had been registered.

Sarma assumed charge of his present post in November 2019 after Hajela was transferred to Madhya Pradesh. Sarma had earlier served under Hajela as the NRC executive director from 2014 to February 2017.

Hajela was NRC coordinator from end-2013 till his transfer, which came on the orders of the Supreme Court which had monitored the update of the 1951 register, held to weed out foreigners staying illegally in Assam. Hajela used to report directly to the apex court.

The updated NRC, published on August 31, 2019, had excluded 1,906,657 (19 lakh) of the 33,027,661 (3.3 crore) applicants. Several organisations, including the NGO Assam Public Works (APW) and the state’s BJP-led government, had expressed concern that the register included the names of many illegal immigrants.

Those left out of the NRC can appeal before the foreigners’ tribunals with the required documents, but this process has not started yet.

Sarma’s complaint also expresses suspicion that Hajela wilfully avoided re-verification of those marked as “Originally Inhabitant of Assam” as a whole “to facilitate entry” of ineligible people in the register.

It calls this “not only a dereliction of duty but an act of treason for doing such an activity which is likely to threaten the national security”.

Sarma’s complaint expresses suspicion that Hajela had from the outset had the “intention to do the above acts which constitute serious criminal offence besides endangering national security”.

Hajela had earlier too been accused of facilitating the inclusion of foreigners in the register or tampering with data during the update exercise.

APW, whose petition in the Supreme Court had led to the NRC update, had complained to the CID against Hajela and his close associates last June, alleging widespread manipulation, including elementary data entry fraud, to include illegal migrants.

“We welcome the NRC coordinator’s complaint though it should have been done (soon) after the publication of the NRC in August 2019,” APW president Abhijeet Sharma told this newspaper.

He said the APW had so far filed eight complaints -- to the CBI, CID, and others -- against Hajela.

“Of these, four deal with illegal inclusions and the rest with financial misappropriation. But there has been no apparent movement in connection with our complaints,” Sharma said.

The Registrar General of India, which is yet to notify the 2019 NRC, had notified the register update in December 2013 and the exercise began in 2014. Submission of applications began in March 2015.

The cut-off date for the register update was March 24, 1971 -- the deadline mentioned in the 1985 Assam Accord for the detection and deportation of foreigners, mainly Bangladeshis.

Tenacity, thy name is Hajela