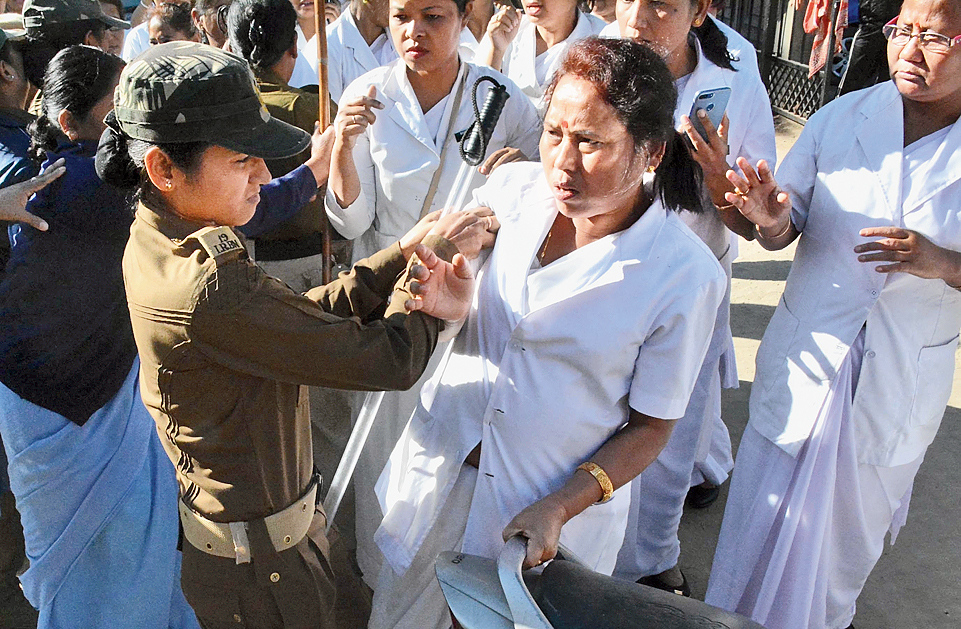 The general nursing and midwifery (GNM) staff nurses in Assam on Thursday decided to withdraw their agitation following an assurance from the state government of salary on a par with BSc nurses.

“The government today promised us same salary for same post. This means the salary of a GNM staff nurse will be the same as that of a BSc nurse,” a member of the All Assam Nurses Association who participated in the meeting said.

There is no separate post as BSc nurse in government hospitals in Assam. Those who complete the four-year BSc nursing course are also appointed as GNM staff nurse.

This agitation was undertaken by nurses who have completed the GNM three-year course. There are nearly 6,500 GNM nurses in Assam.

Government hospitals in the state were severely affected for the past four days as 6,500 nurses stopped attending to their duties to push for their demand. The hospitals had to engage students of BSc nursing courses.

The nurses began their agitation after the state government decided, in accordance with the 7th Pay Commission, to give a bigger grade pay to BSc nurse working in the same post as a GNM nurse.

The association has been demanding the same salary for the same post.

The meeting, held at Janata Bhawan here, was attended by a nine-member delegation of the association, including its president Anjana Sarma Saikia and general secretary Junu Chutia Dehingia.

Although the two-hour meeting concluded at 1pm, the stalemate continued till late in the evening as the association’s leaders were not willing to take a decision without receiving the minutes of the meeting.

“Although the post is the same, the government decided to pay more salary to those who have done the BSc nursing course. Besides, they are promoted frequently while we have to wait for decades for a promotion,” a member of the association said.

There are around 435 BSc nurses in the state. Besides the course duration difference (four years for BSc and three for GNM), only a science student can apply for BSc course while students from any stream can apply for GNM.

Superintendent of JMCH Saurav Borkataky said due to the strike they had sought additional nurses from the district administration and about 10 had been arranged from the Jorhat Christian Medical Centre, also known as Jorhat Mission Hospital.

“When the Mission Hospital nurses arrived by bus, the striking GNM nurses stopped them from entering. Circle officer Debahuti Borah came to negotiate but failed, following which the police detained 200 nurses at the police reserve. There are 330 nurses in JMCH.

Refuting reports about babies dying at JMCH because of the agitation, a leader of the association said death of babies in the maternity ward of government hospitals was common. “What will you say about the death of 16 newborns at the JMCH when there was no protest by the nurses?” she asked.

The All Assam Students’ Union and the Krishak Mukti Sangram Samiti had extended support to the nurses.