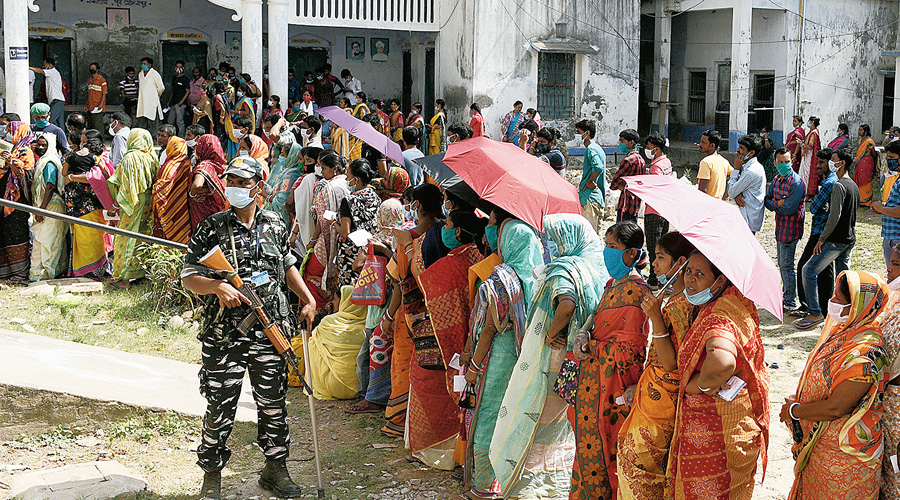 The district election officer has suspended the sector officer, the presiding officer and three other polling officers of 107A Khothlir L.P. School, for dereliction of duty.
File photo
Umanand Jaiswal   |   Guwahati   |   Published 06.04.21, 02:05 AM

Five polling officials have been suspended for “dereliction of duty” after a booth in Assam’s Haflong constituency polled 181 votes in the second phase of Assembly polls on April 1, though the number of registered voters there was 90.

The anomaly came to light on Monday evening after a press note was issued by the chief electoral officer, Nitin Khade, based on information provided by the district election officer of Dima Hasao.

The auxiliary polling station was set up for the first time to facilitate voters in the remote area as the polling percentage in the 2019 parliamentary election was only 34 per cent. Haflong Assembly constituency registered 74 per cent turnout this time.

The district election officer has suspended the sector officer, the presiding officer and three other polling officers of 107A Khothlir L.P. School, for dereliction of duty.

Moreover, the returning officer has recommended repolling at both the auxiliary and the main polling stations.

The incident has evoked widespread criticism. A polling official said it had occurred because of “miscommunication but what actually happened and why will come out in the official probe”.

This is the second incident related to the second phase polls that attracted widespread attention and criticism.

Four polling party personnel were on Friday suspended for “violating transport protocol” while ferrying an EVM from Ratabari constituency to the strongroom in Karimganj in south Assam on Thursday night in a vehicle belonging to the wife of the BJP MLA from Patherkandi.