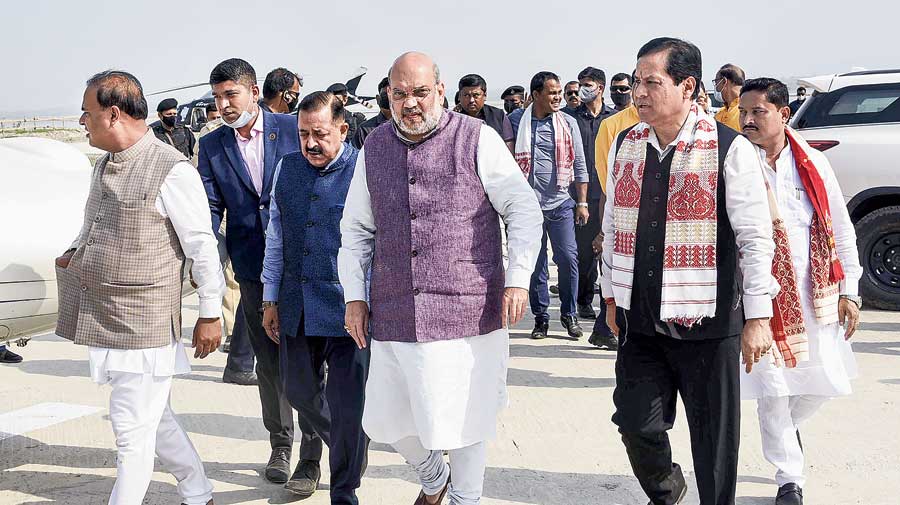 Campaign for the third and final phase of the Assembly elections in Assam ended on Sunday evening with both BJP-led mitrajot and the Congress-led mahajot exuding confidence of forming the next government in an election which insiders and political observers feel is too tight to call after the AIUDF and BPF joined the Congress-led alliance.

In fact, the run-up to the third phase to be held in 40 constituencies, mostly in minority-dominated lower Assam on April 6, has been marked by the BJP and its allies continuous attack on AIUDF chief Badruddin Ajmal. The AIUDF is contesting 13 seats, turning him into a major factor to “polarise” voters.

Union home minister Amit Shah is among those who have attacked Ajmal.

Having had to cut short his campaigning in Assam to rush back to Delhi on Sunday to review the situation triggered by the Maoist attack in Chhattisgarh, Shah could not attend two of three rallies during the day, including the mega rally at Sualkuchi in cabinet minister Himanta Biswa Sarma’s constituency Jalukbari.

Like Shah, Chhattisgarh’s Congress chief minister Bhupesh Baghel, who was also campaigning for the 10-party grand alliance, flew back, on Sunday.

But before flying back to Delhi, Shah, in a brief interaction with mediapersons, urged the electorate to vote for Sarma, to strengthen the hands of prime minister Narendra Modi by voting BJP for another term and attacking Ajmal. “Can Ajmal be the identity of Assam?” he asked. 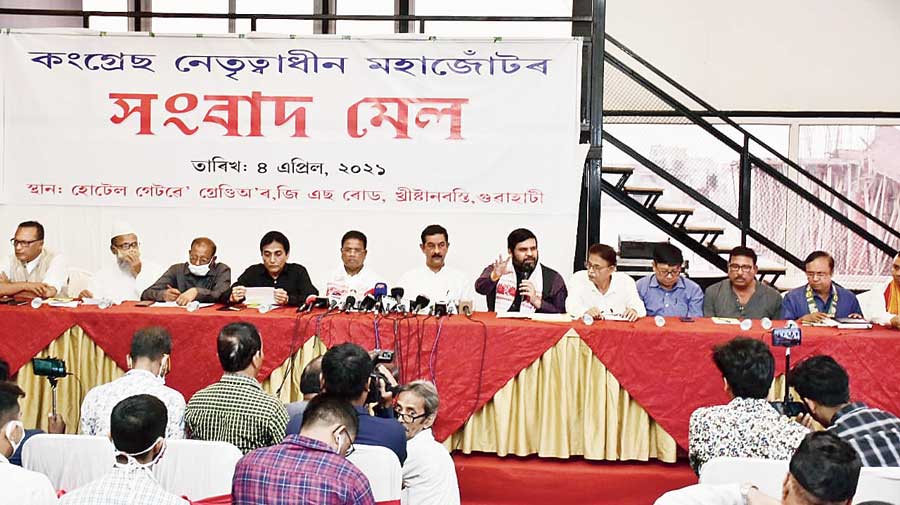 An hour later, Sarma attacked the Congress and AIUDF at the Sualkuchi rally. “The Congress started their campaign with a visit to Batadrava (Srimanta Sankardeva’s birth place) but ended it with Ajmal,” he said suggesting that the Congress has “surrendered” itself to the AIUDF chief to defeat the BJP at the cost of the state.

The BJP has been relentless in showcasing Ajmal as a protector of Bengali-speaking Muslim immigrants and continuously attacking the three-time Lok Sabha MP to “polarise” the voters.

In the first phase, the BJP alliance had attacked the “unholy alliance” between the Congress and AIUDF but in the run-up to the second and third phase it trained its gun on Ajmal by going to the extent of equating him with Prime Minister Narendra Modi.

The BJP’s recurring poll pitch has been: Do you want Modi or do you want Ajmal? Can Ajmal stop (ghuspetiyas) infiltrators and can he be the identity of Assam?

Like the BJP-led alliance leaders got together at the Sualkuchi rally to end the party’s long drawn campaign to retain Assam, the Congress-led grand alliance leaders too addressed a joint press meet. And like the BJP-led alliance, the Congress-led mahajot too exuded confidence of forming the next government because of  its “politics of vision” against the BJP’s “politics of division”.

Assam PCC president   Ripun Bora said the BJP’s attempts to “polarise” the voters have not worked on the ground evident from the support the grand alliance received the first and second phase and is set to sweep the third and final phase.

“Neither do we believe in divide and rule nor do we practice favoritism like the current BJP government. Our five guarantees will be meant for everyone equally irrespective of region, religion, caste or any other parameter that is meant to divide Assam,” the grand alliance said in a press release.

RJD leader Sheikh Shonarul Shah Mustafa said since the BJP had no other issue they continued to attack Ajmal but the people of Assam have seen through their game-plan and supported the Congress-led alliance. RJD is part of the grand alliance.

Vikas Tripathi, a political observer, told The Telegraph that Ajmal’s influence and leadership is uncontested both in his party as well as among the majority of Bengali speaking Muslim voters of the two regions — Brahmaputra and Barak Valleys.

“ Precisely, for this reason, he has been at the centre of BJP' attack as the party makes the issue of protection of cultural identity as the key issue in this elections,” Tripathi said, trying to give a perspective to BJP’s constant attack against Ajmal.

Assam has 126 seats. The first phase saw polling in 47 seats while the second in 39 seats. BJP-led alliance had comprehensively won every election after winning the 2016 state polls but the Congress-led ten party alliance has mounted a strong challenge evident from the frequent visits by the BJP leadership to the state to campaign.