The party insiders said their candidates, 95 in all, would also probably spend three-four days at a resort before counting day just like AIUDF and BPF candidates 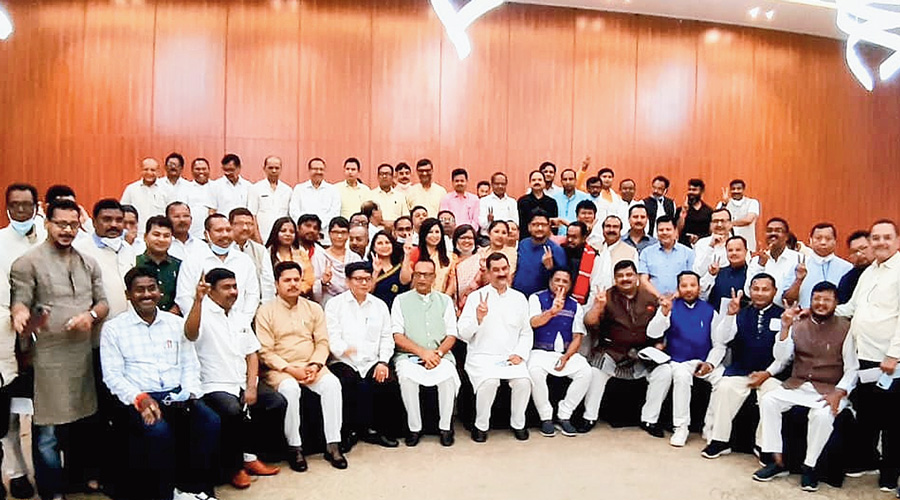 Congress Assembly poll candidates and senior leaders pose for a group photo after their meeting at a resort near the airport in Guwahati on Saturday.
Telegraph picture
Umanand Jaiswal   |   Guwahati   |   Published 18.04.21, 12:32 AM

The Opposition Congress is not leaving anything to chance in the run up to the counting of votes and beyond in Assam.

After flying out AIUDF and BPF candidates to Rajasthan and Chhattisgarh soon after the three-phase polls ended on April 6 “fearing” poaching attempts by the ruling BJP, the Congress on Saturday assembled its candidates and senior leaders at a resort near the airport here to discuss the dos and don’ts before and after counting day on May 2.

Party insiders said Saturday’s get-together was the first-of-its kind organised before the results, a move that reflected its confidence of winning the three-phase elections as well as the fear of losing its candidates in case the competing ruling BJP-led mitrajot or the Congress-led mahajot does not win a clear majority or win by very narrow margin in what appears to be keenly-fought state polls.

Congress insiders said their candidates, 95 in all, would also probably spend three-four days at a resort before counting day just like AIUDF and BPF candidates. AIUDF candidates returned home on Friday following surge in Covid cases.

Senior leaders have also been tasked to monitor post-result developments in areas under their jurisdiction to foil any possible attempts by the ruling BJP to manipulate the verdict, they said.

“We are taking all possible steps to keep our candidates alert, motivated and what needs to be done on the day of result and beyond. Such regular interactions/meetings will also help boost camaraderie and sense of belonging,” a senior leader told The Telegraph.

They said certain developments during the three-phase polls, from transportation of electronic voting machines to their recovery from unauthorised places, have raised a lot of questions about the way things have been handled so far by poll officials.

The state Congress had earlier this week moved the Election Commission requesting a slew of directives to “maintain transparency, impartiality for fair and smooth counting of votes”.

Before that the Congress had moved the chief electoral officer seeking access/link of CCTV surveillance of the strong rooms to all the contesting candidates because they fear that the ruling BJP “may go to any extent to manipulate the mandate” of the Assembly polls.