Meeting of the newly elected MLAs will be held in Guwahati on Sunday to elect the leader, who will be sworn in as the next chief minister 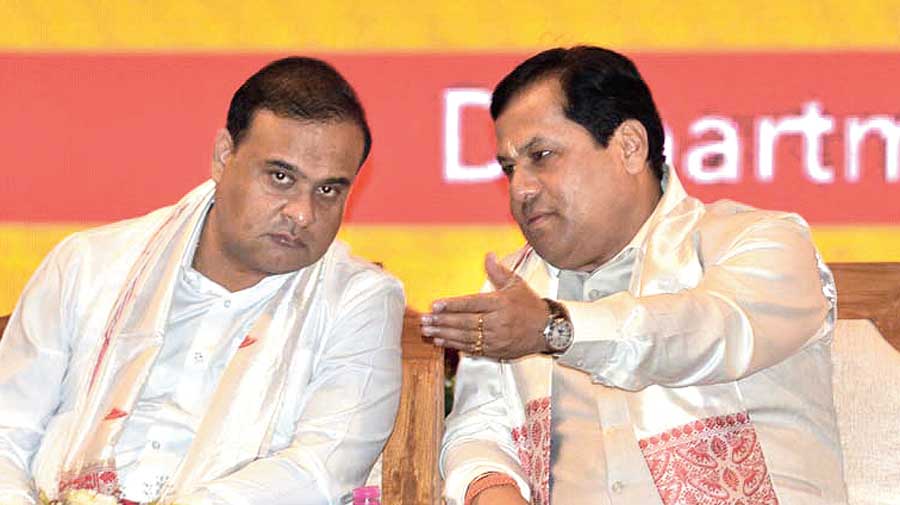 The BJP leadership on Saturday  held lengthy discussions with the two claimants of the Assam chief minister’s post, Sarbananda Sonowal and Himanta Biswa Sarma, amid speculation over change of leadership in the state.

Late at night, sources in Guwahati said the scales appeared to have tilted in favour of a leadership change, suggesting Himanta could become chief minister.

After back-to-back meetings, first separately with the two claimants and then together, it was announced that a meeting of the newly elected MLAs would be held in Guwahati on Sunday to elect the leader, who will be sworn in as the next chief minister.

“The BJP legislative party meeting will take place in Guwahati on Sunday. All your questions would be answered after the meeting,” Himanta told reporters, coming out of BJP chief J.P. Nadda's residence and left hurriedly.

Current chief minister Sonowal too came out ahead of Himanta but he left without saying anything to the waiting reporters.

The central leadership was tight-lipped about whether Sonowal would be allowed to continue for a second term or Himanta, the high-profile minister holding many portfolios in his government, would be the new face in Assam.

Party insiders, however, indicated that a decision had been taken with the intervention of Prime Minister Narendra Modi and the legislative party meeting will elect the leader of his choice on Sunday.

“After meeting J.P. Nadda and Amit Shah, Himanta briefly met Modiji,” one BJP leader said, indicating that this meeting had resolved the situation.

The two leaders had been summoned to Delhi on Saturday and first it was Himanta who went to Nadda’s residence, where other leaders like home minister Amit Shah joined.

After this, Himanta left and then Sonowal reached Nadda's residence. Finally, Himanta returned again and the party leadership held a long discussion with the two leaders, seeking to resolve the tussle for the top post.

Himanta, who had crossed over to the BJP from the Congress and used his political management skills to pave the expansion of the BJP in the northeast, had laid a claim for the chief minister’s post this time.

The pressure from Himanta had put the BJP leadership in a difficult situation and this led to the two being called to Delhi to find an amicable solution.

Himanta’s clout across the Northeast has proved to be an asset for the BJP and party insiders said they can’t afford to annoy or lose him.

Sonowal is a low-profile, loyal and grounded leader, party leaders said, adding that under normal circumstances the leadership would prefer him.

In BJP corridors, home minister Amit Shah’s liking for Himanta, however, is well known and many believe that he could push his case to get him the CM's post.

It’s widely believed that Himanta’s ambition to become chief minister of Assam had led him to quit the Congress and join the BJP. In the Congress, he saw little hope, given the dominance of the Gogoi family.