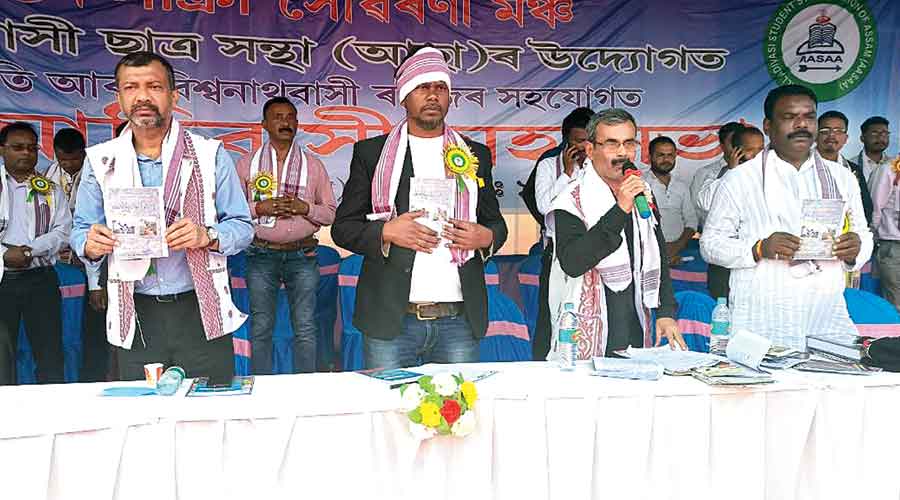 AASAA president Stephen Lakra (Centre) during the release of the mahasabha souvenir at Halem on Sunday.
Telegraph picture
Umanand Jaiswal   |   Guwahati   |   Published 15.03.21, 12:51 AM

The All Adivasi Students’ Association of Assam (AASAA) on Sunday posed ten questions to the ruling BJP, mostly over its “unfulfilled” promises, on a day senior Union ministers Amit Shah and Rajnath Singh campaigned in the state to mobilise support for the party in the upcoming three-phase polls.

The questions were released at the AASAA-organised annual mahasabha at Halem in Biswanath district, about 12 km from where defence minister Singh addressed a massive rally listing out the achievements of the state government in five years compared to previous governments, especially targeting the tea community.

Assam’s Adivasi community, which include the tea tribes, has sway over 40 of the 126 seats.

AASSA president Stephen Lakra said the ten questions has been “triggered” by the ruling party’s promises since the 2014 Lok Sabha polls and their unfulfilment, especially scheduling, daily wage and land rights.

The last question as to why should vote for the BJP reflect the resentment within the community, which has been growing following the manner in which the daily wage issue was handled.

Though the government hiked the daily wage to Rs 217 from Rs 167 last month,

the Gauhati High Court had asked the government not to act against the Indian Tea Association and 17 tea companies till their plea challenging the hike is settled. The petitioners have challenged the hike as illegal.

Lakra told The Telegraph all parties are wooing the adivasi/tea community.

“They want our vote and cheap labour but they don’t want to give us our due. Our population is over one crore but we are taken for granted. That is why we have posed these ten questions.

It is not only the AAASA which is unhappy. The Assam Tea Tribes Students’ Association (ATTSA) has called for a bandh in tea estates across the state on March 22 in protest over the daily wage fiasco, which is not good news for the ruling BJP in Upper Assam which goes to polls on March 27.

The AASAA, like ATTSA, is a pressure group espousing the cause of the community, from seeking basic amenities to adequate job and political representation for community members.

The BJP has stepped up its campaign since Saturday, criticising the Congress for its alleged failure to work for the welfare of the adivasi/tea community when in power and what they have done in the past five years.

Though the community is “unhappy” with the BJP, the Congress has not been able to gain as much as it should have, PCC insiders said.

“The Congress-led grand alliance is not seen to be too effective in the field as yet. Secondly, though the party has guaranteed to hike the daily wage to Rs 365 if it is voted back to power, it could have made more impact had it given more ticketsto deserving community members,” a PCC insider said.

⚫Why the BJP did not act on its promise of according ST status to the adivasi/tea community?

⚫Why land pattas were not distributed to the community?

⚫Why LP & ME schools in tea garden areas not provincialised?

⚫What happened to the promise of setting up 100 residential schools in the tea belt?

⚫How can tea garden people survive with galloping price rise?

⚫What happened to plans to open ATMs in tea gardens?

⚫Where are the Adivasis in the sabka saath sabka vikash plan of the government?

⚫Why happened to the promise of bringing down price of LPG cooking gas?

⚫Why will people vote for the BJP? For non-fulfilment of promises?