39 of them joined the Congress, which is opposed to the Citizenship matrix; 30 others embraced the BJP, whose government at the Centre brought the law into force 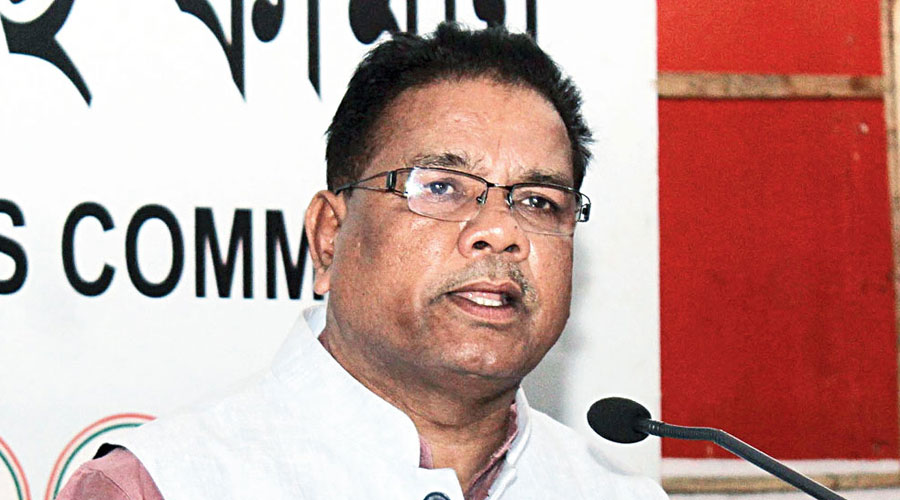 The movement against the Citizenship Amendment Act had united the artistes of Assam last year but the upcoming Assembly polls has divided the fraternity in two halves, which seems to be evident from the two induction functions held by the ruling BJP and the Opposition Congress here on Tuesday.

While 39 artistes joined the Congress, which is opposed to the CAA, 30 others embraced the BJP, whose government at the Centre brought the law into force. Indications are that more such inductions will be effected by both parties in the run-up to the polls next year. BJP had inducted a few more artistes last week.

Most of those who joined either the BJP or the Congress were an integral part of the anti-CAA movement in the state. Now they will be taking diametrically opposing positions on the CAA which is likely to be the main issue in the state polls.

Leading the artistes to the Opposition camp were popular singer Babu Baruah and lyricist Ajoy Phukan as this group from the entertainment industry is convinced that the Congress was consistent in its stand against the CAA, according to Imdad Hussain, AICC member and Assam Pradesh Congress Committee spokesperson.

The artistes were inducted in the Congress by PCC president Ripun Bora.

“They believe in the party’s secular and inclusive ideology. They were also convinced that only the Congress can fight the legislation in Parliament. More artistes will join the party and they will take the Congress’s anti-CAA and other pro-people messages to the people before the Assembly polls next year,” Hussain told The Telegraph.

The Citizenship Amendment Act, which provides citizenship to non-Muslims from Bangladesh, Pakistan and Afghanistan entering the country till December 2014, came into effect on January 10 this year.

Those opposed to the CAA assert that it is a threat to Assam’s identity and culture while those in its favour dismiss the contention. Protests are still being held across the Brahmaputra Valley even now.

Besides Bora, several senior leaders including AICC joint secretary Sanjay Choudhary, Sarat Borkotoky and Bhumidhar Barman were present during the induction function, the highlight of which was the launch was a catchy song by Babu, CAA nemanu (We won’t accept CAA).

They were welcomed by state president Ranjeet Kumar Dass, who said the BJP has already scaled up the number of seats it would win — from 84 in 2016 to 100 in the 2021 Assembly polls. Assam has 126 seats.

Shekhar, who had composed the BJP’s popular campaign song Akou ebaar Modi sarkar (Once more, Modi government) for the 2019 Lok Sabha polls and was also a leading face of the anti-CAA protests, said the BJP will form the government once again.

State BJP chief spokesperson Rupam Goswami said the artistes  joined the ruling party because they have seen that “lakhs and lakhs of illegal migrants” have not entered Assam because of the legislation as was claimed by the anti-CAA brigade.

“Moreover, they have faith in the BJP, our Prime Minister and our chief minister (Sarbananda Sonowal) and the development work they are doing,” Goswami said, adding the artistes met the chief minister after the induction function.

Though both the Congress and BJP were happy with the developments ahead of the polls, social media and TV debates were mostly critical of the artistes, most questioning their conduct.

A panellist said there was nothing wrong in them joining any party but they should desist from playing with the emotions of the common people who believe in what they see and hear. Others said that the upcoming polls have “unmasked” the artistes and their political preferences.

The CAA has remained an emotive issue in Assam since 2018.

There was lot of criticism when popular singer Zubeen Garg, the leading face of the anti-CAA movement in Assam, when he was earlier this month asked to become the brand ambassador of the state agriculture department. He has not yet accepted the offer but has been keeping a low profile since. Popular actor Jatin Bora, who had resigned from the BJP during the anti-CAA movement, and rejoined the party recently was criticised and trolled for “letting the people down”.

Paresh Malakar, general secretary, Axom Nagarik Samaj, said the developments would not make any impact on politics at the grassroots.