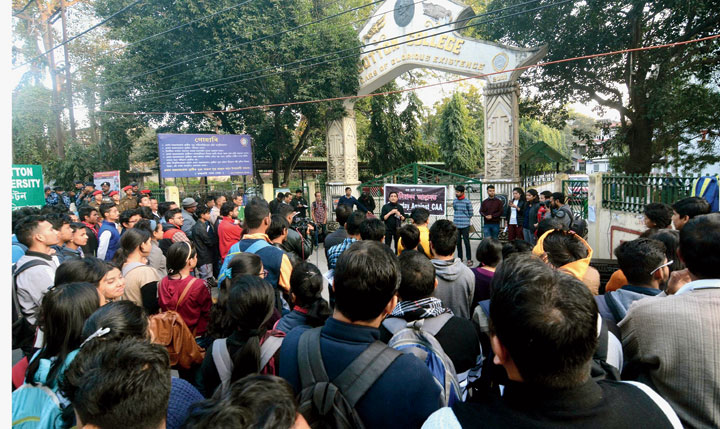 Cotton University students on Saturday urged the people of the state not to vote for the BJP in the 2021 Assembly elections, given the ruling party’s alleged indifference towards them as proven by its hasty imposition of the “anti-Assam” Citizenship (Amendment) Act.

“The Centre is doing everything to impose the Act which threatens our identity. The people of Assam are protesting but the government, by hook or by crook, brought the law, destroying their hopes. We have to ensure the BJP doesn’t return to power in the next election,” said Deepjyoti Das, former general secretary of Cotton University Students’ Union, at a satro homabekh (students’ congregation) to mark one month of the anti-CAA agitation.

After the meeting, the students took out a 2km torchlight rally against the law, which was passed by the Lok Sabha on December 9 and the Rajya Sabha on December 11 and brought into force on Friday. They also held an exhibition of 1,000 photographs related to the anti-CAA movement.

Dubbing the government’s move to notify the Act “dictatorial”, Das said, “The Supreme Court will hear petitions on constitutional validity of the Act on January 22. So why not wait till then? Why notify the Act hastily? We will not accept CAA, whatever the cost.”

Rahul Bordoloi, general secretary of the union, and his predecessor Pranjal Kalita, said the divisive and unconstitutional Act must be scrapped. “The photographs showcase the courage of students who are protesting continuously without fearing baton charge, tear gas and firing by security personnel. We will not accept CAA,” Bordoloi said.

The students, as a part of their Saturday Against CAA programme, distributed leaflets to hundreds of people, which said: “CAA is unconstitutional, it violates the Assam Accord, the Act will hit our economy and will destroy the language, culture.”

The students demanded scrapping of the law, release of those arrested during the agitation, including KMSS leaders Akhil Gogoi and Bitu Sonowal, acknowledging the five killed during protests as martyrs and protecting political, cultural, economic and linguistic rights of citizens.