The 108 and 102 ambulance staff, who declared a temporary withdrawal of their strike and resumption of services from Wednesday morning, 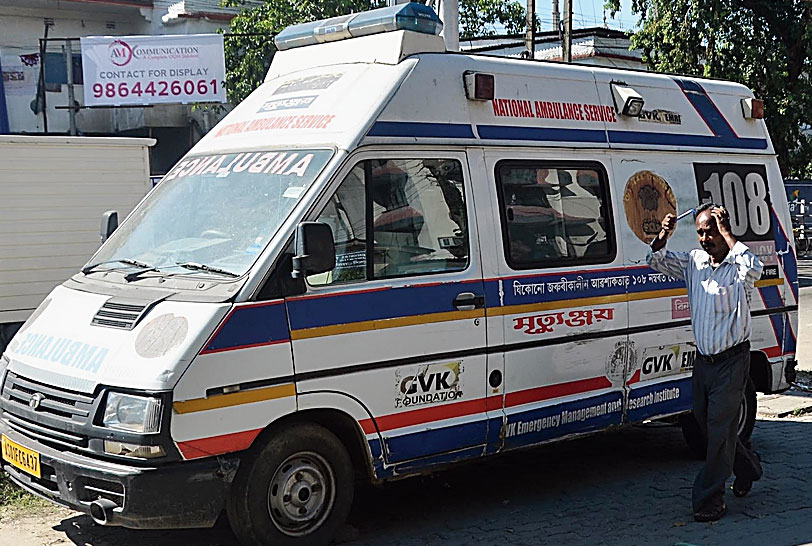 Guwahati: The 108 and 102 ambulance staff, who declared a temporary withdrawal of their strike and resumption of services from Wednesday morning, were not allowed to do so by the GVK-EMRI management, citing incompletion of “medico legal procedures”.

The ambulance staff had, on Tuesday, announced the withdrawal of their strike against pending increment and other demands till a discussion with health minister Himanta Biswa Sarma on Thursday. Sarma agreed to meet the agitating staff after chief minister Sarbananda Sonowal and Lahoal MLA Rituparna Barua intervened.

The employees, under the banner of the All Assam 108 Mrityunjoy Employees’ Association, on Wednesday tried to resume the services but were prevented by the GVK-EMRI management as certain medico-legal procedures have not been completed.

The ambulance staff had refused to file “case closure, fuel closure, patient care record (PCR) submission and daily attendance”, which, the company said, was essential to provide services under the company rules.

In a written statement, the GVK-EMRI authority said, “Mritunjoy 108, 102 and emergency response office employees are on an illegal strike since September 5 and stalled ambulance operations and emergency services across Assam. They stopped following the medico legal procedures since August 19. We have received an official statement from the employees’ union on September 18, saying that they are calling off the strike partially from 8am on Wednesday but will abstain from following the mandatory medico legal procedures such as giving case closure, fuel closure, PCR submission and daily attendance. Without these, it is as good as not operating the ambulances and amounts to continuation of the strike.”

The company also said it had handed over all the ambulances to the district administration on written instructions from the National Health Mission (NHM), Assam, and to resume the services, it needs to request the administration and the NHM authorities to give them back their resources. The keys of the ambulances are with the agitating employees and the company needs to conduct an audit of the vehicles and assets by its audit team for discrepancies or missing items according to the policies and guidelines, the company added.

The GVK-EMRI management promised to complete the formalities for resumption of services but said the employees had to withdraw the strike unconditionally for total operations to resume.