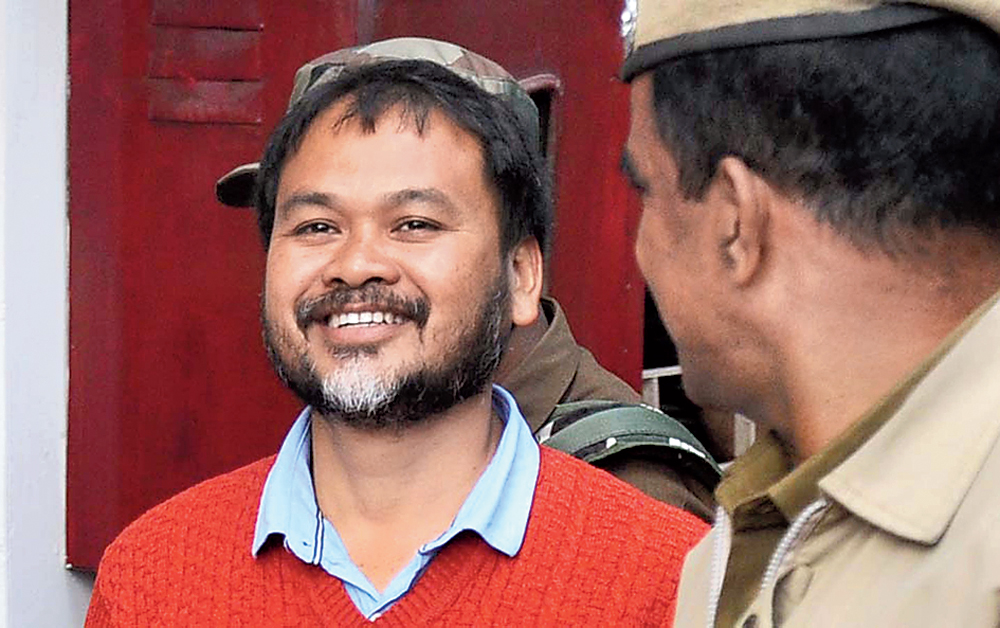 Krishak Mukti Sangram Samiti (KMSS) leader Akhil Gogoi, granted bail in two cases since Saturday, was rearrested in another case on Wednesday and brought to Dibrugarh jail from Sivasagar jail.

Akhil’s counsel Hemen Bora said there was a war-like situation in the country because of the coronavirus but the police were not letting Akhil come out of jail.

“Akhil was granted bail by the court. In fact, he has been acquitted in all the cases in Assam as there is no evidence on the charges put on him. Despite this, the Dibrugarh police camped in Sivasagar and took him to Dibrugarh,” Bora said.

Bora alleged, “It is the government which is doing this. It has put democracy at risk. We will not blame the police. At the time of global pandemic, they (the government) are also harassing police personnel by compelling them to do these things.”

He also alleged that no arrest memo was given to them while taking Akhil to Dibrugarh and demanded an arrest warrant and arrest memo.

Dibrugarh superintendent of police Sreejith T. told The Telegraph that they had arrested Akhil 10 days ago but he was kept at Sivasagar jail in connection with a police case in that district. Since he had been granted bail in that case, he was brought to Dibrugarh. Proceedings are on, he added.

He said an arrest memo is the right of an arrested person and it will “eventually” be given to Akhil’s counsel.

Reacting to the move, leader of the Opposition in the Assam Assembly Debabrata Saikia said the government seemed to be unable to “forgive” Akhil for his alleged opposition to the Citizenship Amendment Act (CAA). He condemned Dispur’s “relentless attempts” to keep Akhil behind the bars even at the cost of flouting the manifest will of various courts of law, including the Supreme Court.

“It seems the government is unable to forgive him for opposing the contentious CAA and is blatantly pursuing an agenda of vendetta,” Saikia said.

Akhil has been in judicial custody since December 27, 2019, for alleged links with Maoists.

Akhil was first arrested by Assam police on December 12 last year from Jorhat and was then handed over to the NIA on December 17.