Move aims to ensure the cultural, political and economic rights of the indigenous communities of the region 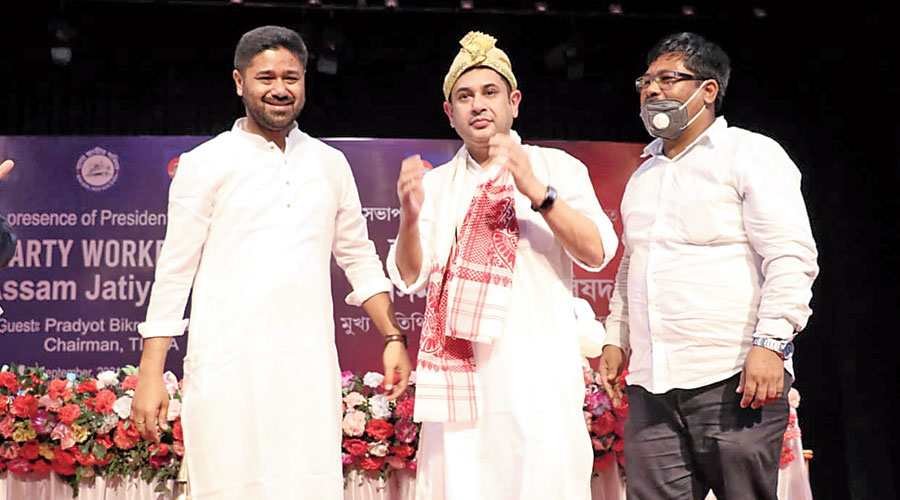 The Assam Jatiya Parishad and the Tipraha Indigenous People’s Regional Alliance joined hands on Tuesday to unite the other regional parties of the Northeast so that they could work together to ensure the cultural, political and economic rights of the indigenous communities of the region.

The decision to this effect was announced at the AJP workers meet held here in presence of Tipra chairman and royal scion Pradyot Kishore Manikya Debbarma, the chief guest of the event, who said that it was the time to come together for one last fight to secure the future of the indigenous people of the region.

While the AJP was formed in September 2020, the TIPRA was formed in February 2021, their formation triggered by the contentious CAA whose rules are yet to be framed.

Both the fledgling parties see it as a threat to the culture, identity and language of the indigenous people of the northeast. The AJP had made it its key poll plank in the

Assembly polls held in March-April but could win only a single seat.

The TIPRA, however, made a stunning debut in the Tripura Tribal Areas Autonomous District Council (TTAADC) elections held in April by emerging as the single largest party at the expense of the ruling BJP-IPFT alliance. It also ended the Left’s 15-year reign in the TTAADC, sending a strong message that regional parties can survive without compromising their ideology or support of the national parties.

“This is the objective behind our move to unite the regional parties of the Northeast because our problems and demand are similar. Our goal is to ensure the survival of the indigenous population and give them a life of dignity,” AJP general secretary Jagadish Bhuyan told The Telegraph after the meeting.

Both Debbarma and AJP president Lurinjyoti Gogoi in their respective speeches said they were not bothered about winning or losing but nobody should accuse them of not trying to secure the future of the indigenous population of their states and the Northeast.

Debbarma said the indigenous tribal population of Tripura has been reduced to a minority in their own state because of influx while Assam is also moving in that direction.

“What we need is a united movement so that we can speak in one voice before Delhi to ensure the constitutional rights of my people and that of the Northeast. We will talk to PPA, NPP and UDP... I am already in touch with IPFT, an ally of the BJP,” Debbarma said.

The imposition of CAA, both Debbarma and Gogoi said, poses a huge threat to the culture, identity and language of the Northeast and this can be prevented only by ensuring the rights of the affected population.

Thanking the AJP for inviting him to their meeting, Debbarma said he would install the statue of legendary Ahom general Lachit Barphukan in the TTAADC  because it was important that the people of other Northeast states are also aware of his exploits just like mainland India.

On his part, Gogoi extended AJP’s support to the TIPRA’s demand of Greater Tipraland/Tipraland envisaging the constitutional rights of the indigenous people of Tripura.

Gogoi also used the opportunity to reveal his party’s plan to hold a protest against CAA in the district headquarters on September 14 and a week-long programme across the state seeking the repeal of CAA and implementation of Clause 6 of the 1985 Assam Accord.

The accord, which brought an end to the six-year-long Assam Movement against illegal influx, provides for constitutional, legislative and administrative safeguards, as may be appropriate, to protect, preserve and promote the cultural, social, linguistic identity and heritage of the Assamese people.