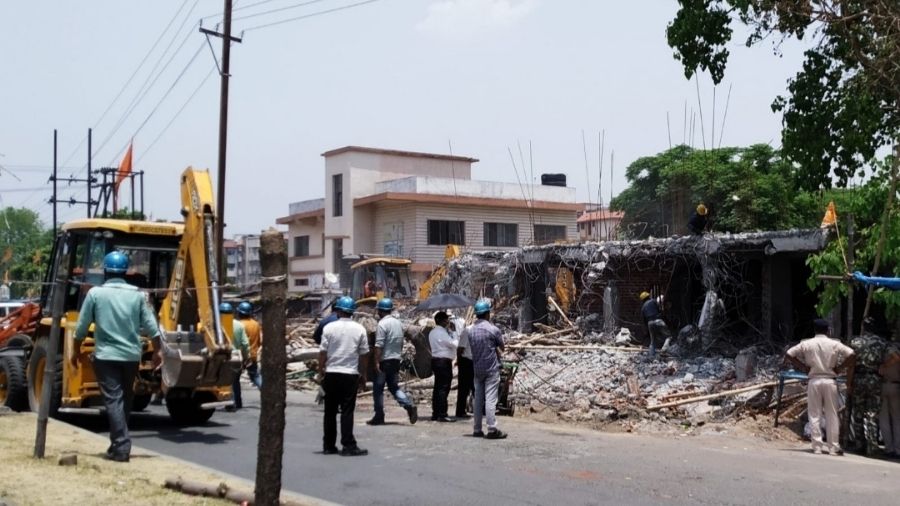 In an unprecedented and sudden action, Jamshedpur Notified Area Committee (JNAC) on Thursday demolished an under-constructed market complex along Marine Drive in Kadma.

The upcoming market complex was being constructed by the brother of a local influential BJP leader on an encroached land.

The market complex in question was being constructed on a plot of land measuring 40 ft by 60 ft at a prime location near the Ghoda Chowk along the Marine Drive.

It was a structure made of rods and concrete. The construction had reached up to the first floor with a plan for making two additional floors in it.  The civic body was prompted to take action against the unauthorized construction as the building was being set up at a war footing.

Initially, the supporters of the leader had opposed the demolition squad which had reached there with excavators and manpower accompanied by a section of policemen.

But keeping the intensity of the resistance, the special officer, JNAC, Krishna Kumar, who was present at the spot along with Circle Officer, Jamshedpur, Amit Shrivastav and City Manager, Ravi Bharti, brought in a Quick Response Team and controlled those who were coming in the way of the demolition drive.

"The demolition drive was carried out in pursuance of a court order against the encroacher.  From now onwards, no one will dare to set up such a building on encroached land by means of one's muscle power in Jamshedpur, " said the City Manager, Ravi Bharti while talking to The Telegraph Online.

Bharti said the demolition drive along the Marine Drive was not an exceptional case and the civic body will also take similar action against anyone constructing buildings in deviation from the approved building plan.

Significantly, earlier in February the civic body and the local administration had razed a BJP office set up on an encroached land at Ram Nagar in Kadma.