Tributes pour in for jawans 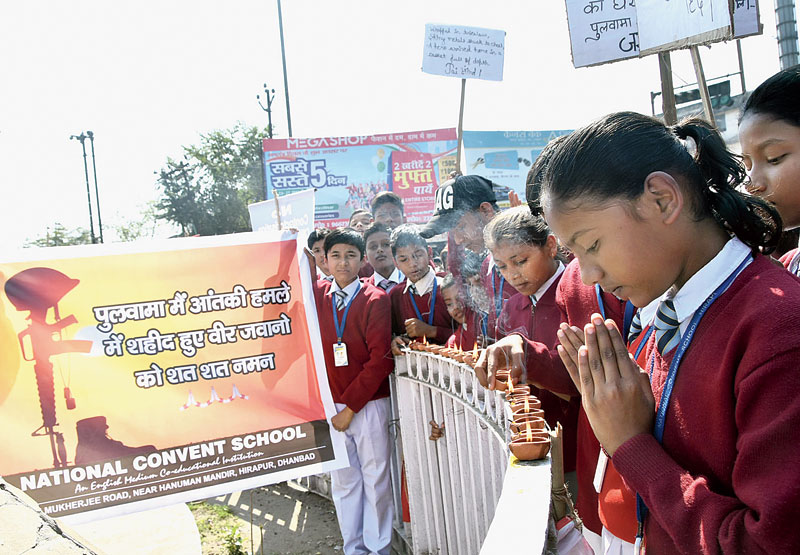 A number of events were held across Jharkhand on Friday to remember the 44 jawans who were killed in the militant attack on a CRPF convoy in Pulwama in Kashmir on this day last year.

Vijay Soreng, head constable of CRPF’s 82nd Battalion, whose family lives in Kokar, Ranchi, was among those killed in the attack.

The women staging a nonstop sit-in demonstration in Kadru in the state capital since January 20 to protest against the new citizenship matrix also observed a two-minute silence to pay tribute to those who died in the Pulwama attack.

Students took out a rally from Doranda College to Mecon Chowk in the capital under the aegis of ABVP, the students’ wing of the RSS.

Around 400 students participated in the rally holding a tricolour and raising slogans such as “Pulwama he shaheed amar rahe” and “Amar ahaheedo ka balidan nahi bhulega Hindustan”.

In the evening, around 100 people paid homage to the jawans by lighting earthen lamps at the Dhurwa roundabout where the statue of Thakur Vishwanath Shahdeo, who was among the rulers whop fought in the 1857 war against the British, is situated.

Over 100 members of Rashtra Yuva Shakti also observed a fast from 9am to 5pm at Albert Ekka Chowk in the heart of Ranchi to pay tribute to the jawans. As they observed the fast, other members played patriotic songs.

The attack anniversary impacted Valentine’s Day celebrations as well. Unlike previous years, very few couples could be seen at the city parks.

At Carnival Banquet Hall, where Bollywood singer Sapna Choudhary has been invited for a musical event for Valentine’s Day, the organisers informed couples that the event would start after a minute of silence for those who died in Pulwama.

Similar programmes were organised in different parts of the state, including by schools of Dhanbad.