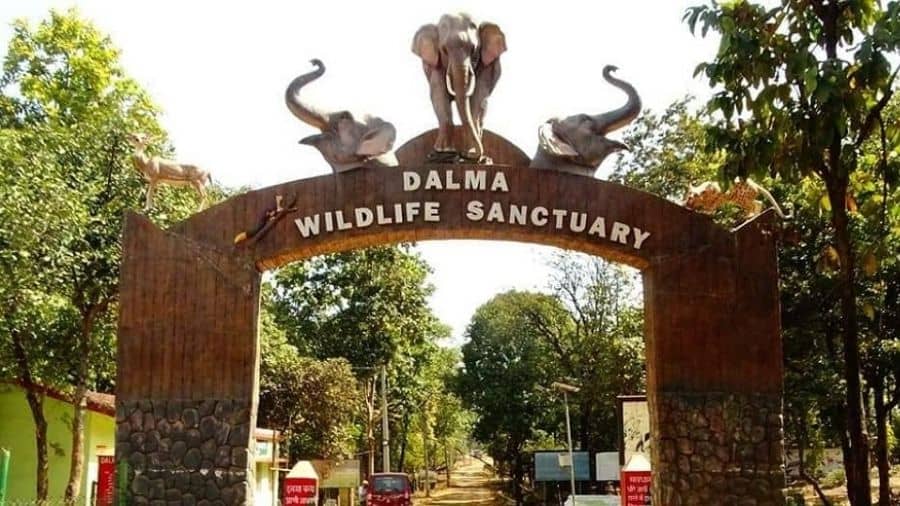 Tourists visiting the scenic wildlife sanctuary are missing the elephants, the main attraction at the sprawling 192 sq km reserve.

All the jumbos have presently come downhill for their annual sojourn to the jungles of West Midnapore and Bankura in neighbouring Bengal. Some elephants have already slipped into Bengal while most are at the Jharkhand-Bengal border. A few jumbos are scattered in the jungles in the foothills of the Dalma sanctuary. Around 25 elephants, who don't migrate to Bengal, are also positioned in the foothills.

Tourists from Jharkhand, Bengal, Odisha, Bihar and Chhattisgarh visit the sanctuary, 30 km from Jamshedpur, to spend quality time amidst nature. Tourists prefer to stay at the accommodations (staff quarters) at Pinderabera, located 14 km from the main entrance at Makulakocha.

Tourists also get accommodations at plush air-conditioned cottages, non-AC rooms and bamboo hut at Makulakocha. They take an uphill tour of the sanctuary to watch elephants at their playful best near watering holes and also visit the ancient Shiva temple located uphill. However, the uphill is presently sans the Asiatic elephants much to the disappointment of the tourists.

"I went to Dalma hilltop with my family a couple of days back but we did not come across a single elephant. We also went to the Badka Bandh, Majhla Bandh, Neechla Bandh and Bijli Ghati but could not find the jumbos," said Mohit Jha, a businessman in Jamshedpur.

Ravi Singh, another tourist from Jamshedpur, echoed Jha and said elephants are not present uphill and he missed the main attraction. "I thought of watching the jumbos but came back disappointed. Forest staff said the elephants have embarked on their migration to Bengal," Singh, who runs a homeopathy shop in Jamshedpur, said.

Dalma range officer (West) Dinesh Chandra said elephants were in the foothills. "Some jumbos who were present uphill have moved downhill on their way to Bengal," he added.

According to him, tourists would be able to watch the elephants if the jumbos, who stay at the sanctuary throughout the year, move uphill."However, this depends on the mood of the elephants. After all jumbos are moving animals," he added.

The elephants migrate to Bengal via two designated corridors -- one from Jhunjka leading to Nutandih and the other from Burudih, passing through Narsingpur, Dalapani, Suklara and Aamdapahari. The jumbos will amble back to their Dalma home in February-March next year.