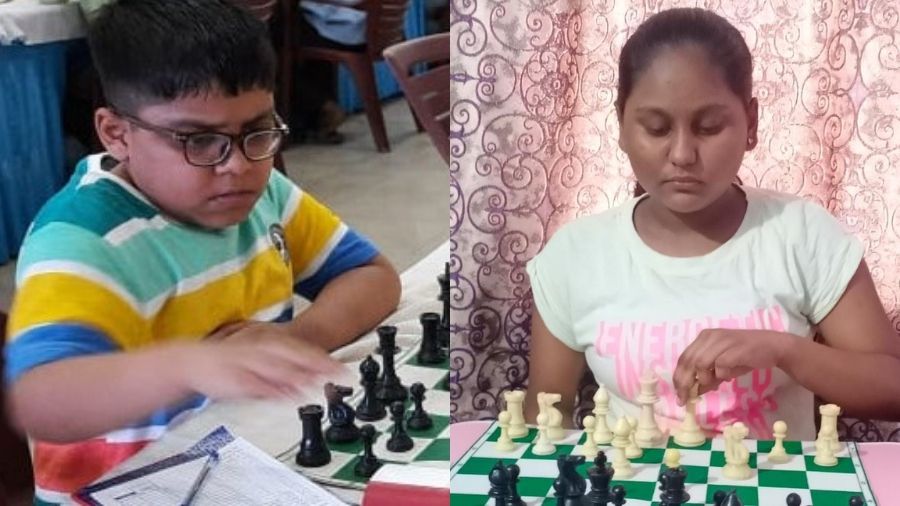 Adhiraj Mitra and Kriti Kumari, both from East Singhbhum, emerged champions in the under-18 state championship, a part of an ongoing online chess festival in the state.

Shaswata Paul (West Singhbhum) and Aditi Raj (Ranchi) stamped their authority in the under-16 age group.

The champions in the respective age sections will represent Jharkhand in the national championships (under-18 and 16) to be held later this month.

Jamshedpur-based Adhiraj, the youngest international Fide-rated chess player in Jharkhand, scored six wins and a draw against his arch rival and district mate Souryadipta Sarkar. The latter, who conceded an extra draw to  Archit Mittal of Dhanbad in the second round itself, needed to win his last game with White pieces against the eventual winner of the event Adhiraj.

He was half a point ahead of Souryadipota who enjoyed a tiny advantage throughout, which was not enough to win. Adhiraj meticulously worked to get a draw to ensure the championship.

The 10-year-old Adhiraj crossed the 1,000-mark to become eligible for an international rating. His rating jumped after he won the All India Fide rating tournament (in the U-7 age group) held in Chaibasa, West Singhbhum, in 2019 and fulfilled the eligibility criteria.

The budding chess enthusiast loves to battle it out in higher age groups.

Kriti secured 4.5 point (out of seven rounds) to finish ahead of Dhanbad’s Sneha Verma who managed four points from six games. Sneha got the second berth for the nationals on better tie-break points than Dyuti Chakraborty and Dishita Dey (both from East Singhbhum) who too had four points each.

Shaswata made a comeback after conceding a draw in the first round to reach the top of the table in the last round and settled for a draw against Aditi, the eventual winner of the girls category of U-16, to win the championship. Shaswata scored six points, half a point ahead of Aditi's tally of 5.5 points. Both the championships were played in a combined manner.

The matches were played on a digital platform named Li-Chess under Swiss Rapid rules of FIDE which is going to be used in the forthcoming nationals and World Championships for 2021.1.