Rush in Bihar-bound buses and trains for Chhath 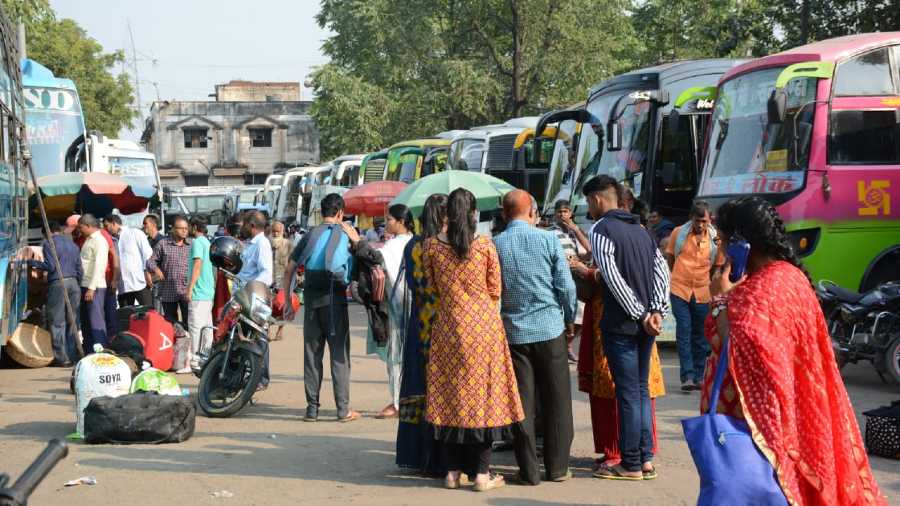 All Bihar-bound long distance buses and trains either originating or passing through Tatanagar are witnessing a huge rush for Chhath. Many prospective passengers have failed to book their seats in these Bihar-bound buses on Sunday.

“We could not book tickets in advance. This morning when we reached Sitaramdera Bus Terminus we realised that tickets were not available forBihar-bound buses. Will try our luck tomorrow,” said Biresh Kumar, a resident of Baridih. He was supposed to travel to Gopalganj, his native place to celebrate Chhath.

As many as 50 long distance buses left Sitaramdera Bus Terminus on Sunday for various destinations in Bihar. Chief patron of Jamshedpur Bus Owners Association, Upendra Sharma said, “Seats are not available in Bihar-bound buses. Such a situation will prevail for the next two days.” Bihar-bound trains are also witnessing a huge rush for the past two days.

Confirmed berths were not available in Tata-Danapur Express, Tata-Chapra Link Express and South Bihar Express till November 9, as they reached the ‘no room’ status. Railway officials at the commercial department said that they had sent a requisition to the headquarters of South Eastern Railway in Calcutta for additional sleeper coaches in Bihar-bound trains to buffer the Chhath crowd.

The South Eastern Railways is also running as many as five festival trains to ease the Chhath rush. Tatanagar station director H K Balmuchu said that they are taking extra care to provide security to the commuters travelling in general coaches as they are the ones who have to bear the brunt of the menace created by some anti-social elements. Chhath, one of the biggest festivals in Bihar and Jharkhand, will be celebrated for four days from  November 8 to November 11 this year.

Most people prefer to travel to their native places to celebrate the festival with their near and dear ones.