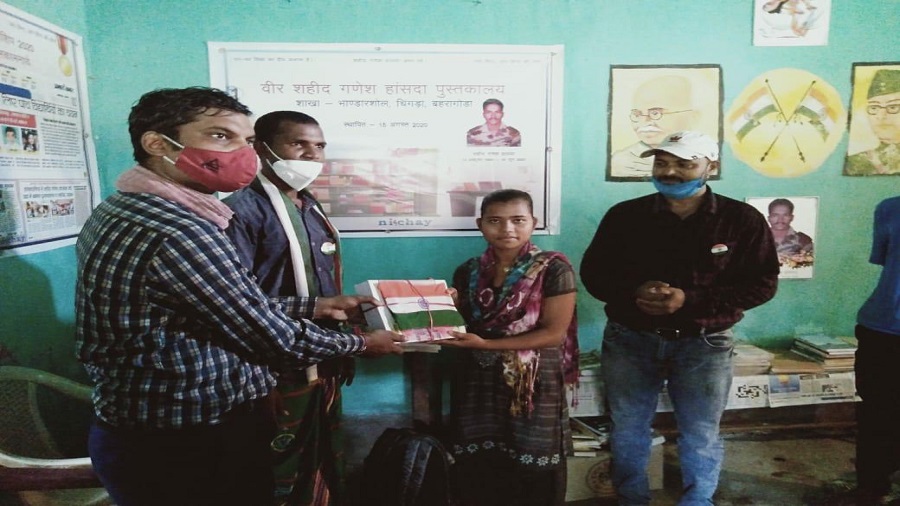 The children of the remote Bhandarshol village in Baharagora block of the East Singhbhum district celebrated freedom from ignorance on the 74th Independence Day, when the village got its first library on Saturday.

The library, which started with a mere 100 books donated by various Samaritans in and around Jamshedpur, was named after Galwan martyr Ganesh Hansda.

On Saturday, the library, which is within a village building was inaugurated by Hansda’s elder brother Dinesh.

“Children in remote areas face problems getting access to books. This village library named after Ganesh will cater to many children in nearby villages. I am happy that the library is named after Ganesh and that it will be able to ignite the quest for knowledge for many,” said Dinesh Hansda, who also hoisted the tricolour.

The library will comprise of daily newspapers, magazines, motivational books, and literature along with course materials for intermediate exams and graduation.

Nischay Foundation in Jamshedpur supported the formation of the library by collecting the books.

A library committee was also formed on the spot where around four members were entrusted with the responsibility of the library.

The members aim to make it a full-fledged library for school and college-going students and for those who aim to appear for competitive examinations.

The residents of the villagers also aim to start two more libraries in the other two villages of the panchayat.

“We aim to start another library on Teacher’s Day, September 5. We have already started getting calls from youth organisations from other panchayats that have showed interest in opening a library in their respective villages. The objective is to connect people to libraries and create a habit of reading books and gaining knowledge,” said Tarun Kumar, founder of Nischay Foundation.

Bikas Bhuiyan, a 15-year-old student in Bhandarshol is happy for the first library in his village.