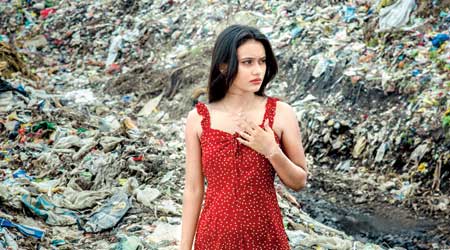 The Ranchi Municipal Corporation has decided to take up regular monitoring of the under-construction compressed bio-gas plant coming up in the Jharkhand capital to ensure the project is completed on time and dumping of waste at Jhiri is stopped.

The trigger for the decision seems to be a video which was widely shared on social media a few days ago showing a model walking in a red dress at the garbage dump yard at Jhiri, around 15km from Ranchi.

Surbhi, who said she was 2019 Miss Jharkhand, claimed that the video was intended to highlight the harmful effects of unsafe garbage dumping before the civic authorities and state government.

A meeting was convened by RMC deputy municipal commissioner Sheetal Kumari on Wednesday to review the status of the waste processing project at Jhiri.

“We had signed a concession agreement in March this year with GAIL (India), an integrated energy PSU in the hydrocarbon sector, for setting up a compressed bio-gas (CBG) plant in Ranchi to process the organic municipal solid waste and recycle it into compressed biogas and fermented bio-manure on a daily basis. The work began last month and we have decided to regularly monitor its progress so that the project is completed in time and waste dumping at Jhiri is stopped,” said Kumari.

According to the agreement between GAIL (India) and the corporation, the plant would process 300 tonnes of organic municipal solid waste daily and will produce five tonnes of compressed biogas and approximately 25 tonnes of fermented bio-manure daily.

“In the first phase, we would set up a plant with a capacity of processing 150 tonnes per day which would be completed by November-December 2022. The cost of setting up the plant would be approximately Rs 28.19 crore which would be borne by GAIL (India). We will also be setting up another plant. The RMC has given us eight acres of land near Jhiri on the outskirts of Ranchi to set up the plants. The RMC will be saving in 20 years around Rs 81 crore expenses incurred at present for waste disposal. It would also claim 100 per cent carbon credit in terms of waste disposal after the plants start functioning,” said a GAIL (India) officer on the condition of anonymity.

GAIL (India) executive director (project), K.B. Singh, said that there were issues regarding construction of access roads to the plant at Jhiri which has been resolved.

“The issues of the access roads to the under-construction CBG plant at Jhiri has been resolved and construction work began in August. The project is being monitored and would be completed before December 2022 after which the issue of waste dumping at Jhiri would come to an end,” said Singh.

The maker of the video, Ranchi-based photographer Pranjal Kumar, claimed that the shoot was done in July for an international photography competition and uploaded on social media in the first week of August.

“We know garbage dumping is an issue across all major cities of the country, not only in Ranchi. Our aim was to highlight the issue so that the government finds a solution,” he said.