The company said that the waste storage dump, connected to the plant, collapsed on Tuesday afternoon 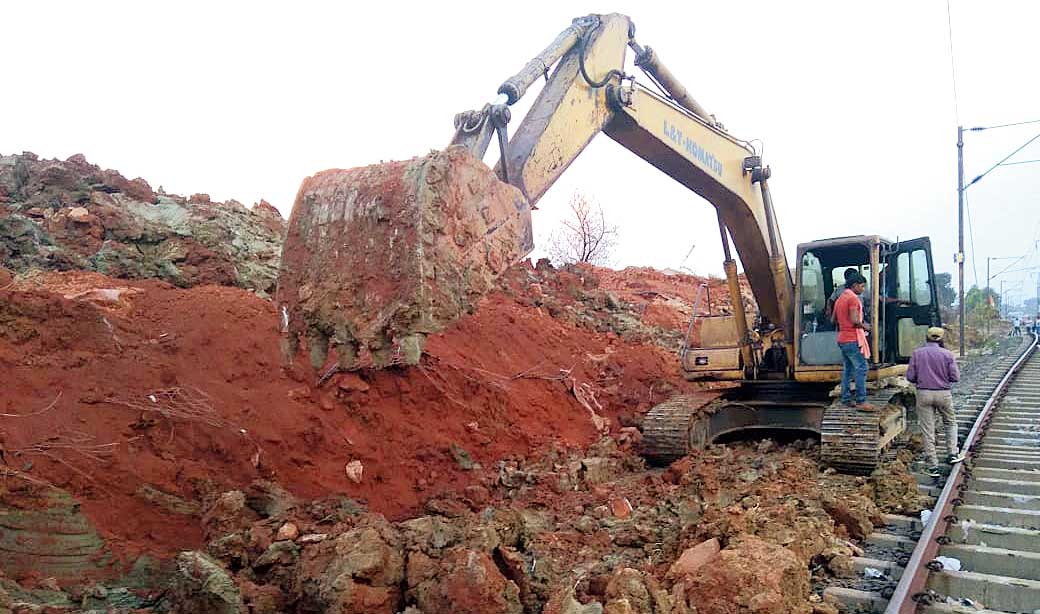 South Chhotanagpur commissioner Subhra Verma, who visited the site of the industrial spill on Wednesday, said that the Hindalco was to blame for the mishap that, she said, occurred when the boundary wall of the dump collapsed.
Telegraph picture
Raj Kumar   |   Ranchi   |   Published 11.04.19, 07:05 PM

The state pollution board has issued a showcause notice to Hindalco, seeking details of its Muri plant waste dump whose collapse on Tuesday led to a spill of bauxite sludge that spread across 35 acres with debris reaching nearby railway tracks of the local train station.

Jharkhand State Pollution Board chairman A.K. Rastogi, who issued the notice on Wednesday, said the company had assured them in March that the height of the dump was as per an approved design in response to a routine query, initiated in February by the Central Pollution Control Board, about the stability of the red mud (bauxite residue) dump.

“On March 27, five senior officers of Hindalco, senior vice president N.N. Roy, assistant vice president Vankatesh, senior general manager S. Tripathi and corporate officers Sanjay Srivastava and P. Tibrewal, had held a presentation before the pollution board to say that the height of dump was as per a design approved by Central Building Research Institute (CBRI), Roorkee,” Rastogi said.

He said Hindalco had told the board that the design of the dump was also approved by IIT-Mumbai professor D.N. Singh and IIT-ISM-Dhanbad professor Sharad Kumar Das. “Therefore, our showcause notice has been issued to Hindalco officials and the two professors to find out the nature of technical glitches,” Rastogi explained.

Local residents of Lagam village in Muri, 70km km from here, believe that many plant workers may have been buried under the debris of the spill, but Hindalco has clarified that only one contract worker was missing and that four persons were injured.

The company said that the waste storage dump, connected to the plant, collapsed on Tuesday afternoon. On Wednesday, in filing to the BSE, it said that operations at the Muri alumina plant had been suspended temporarily.

Hindalco has also said that as per its own investigations had indicated no material impact on the surroundings, which include the Subernarekha river and the Muri railway station.

But South Chhotanagpur commissioner Subhra Verma, who visited the site of the industrial spill on Wednesday, said that the Hindalco was to blame for the mishap that, she said, occurred when the boundary wall of the dump collapsed.

“Without going into technical aspects, I found the Hindalco management prima facie responsible for the incident. The cause of accident was damage to the guard wall it had constructed around the pond where the industrial waste was being dumped. I will submit a detail report soon,” she told The Telegraph on Thursday.

Efforts to clear the debris of the spill, spread over 35 acre, began late on Wednesday night after members of the NDRF and others wee able to lay out temporary path to facilitate movement of earth movers, but local residents claimed the operation was taking inordinately long.

“As many as 10 dumpers, each of 40 tonne capacity, and five earthmovers of 5 tonne capacity have been pressed into service. In the afternoon today (Wednesday), only six dumpers and three earth movers were operational. It will take not less than a month to clear the spill which means chances of survival of any worker who may be buried there are slim,” said a local resident who did not wish to be named.

Ranchi deputy commissioner Rai Mahimapat Ray asked The Telegraph to talk to SDO Garima Singh who was supervising the clearing operation. “As the spill is spread over a big area, it is taking a lot of time,” she said, adding that Hindalco officials had assured her of deploying more equipment.

“Let us hope for the best,” Singh said.

On Wednesday, police said they pursuing efforts to ascertain the number of people who may have been at the site at the time of the mishap by scouring call records.

“We have started collecting mobile phone details of the location with the help of a service provider. It will give us a clue about the number of mobile phones that were in use at the time of the accident,” SP (rural) Ashotosh Shekhar said.

But the SP could not say how long the exercise would take. “Work is in process. It is difficult to give a timeline since police are also engaged in duty for Ramnavmi,” he said.