Police ordered to bring back Sanjeev Singh to Dhanbad jail 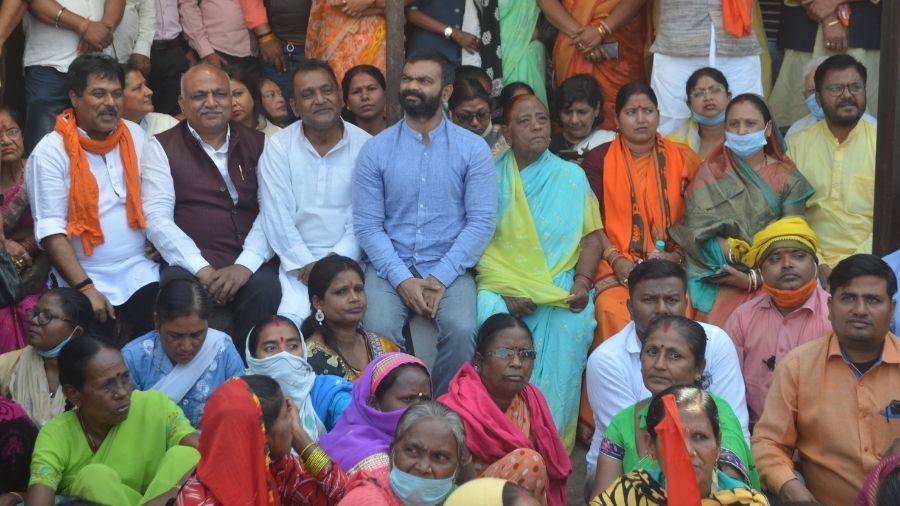 Sanjeev Singh's family members, accompanied by BJP leaders and supporters, at a demonstration at Randhir Verma Chowk in Dhanbad on Thursday.
Picture by Shabbir Hussain
Our Correspondent   |   Dhanbad   |   Published 25.02.21, 07:06 PM

Four days after he was shifted to Dumka central jail amid allegations of political influence, a district court issued orders on Thursday to bring former Jharia MLA Sanjeev Singh back to Dhanbad divisional jail in order to "ensure the majesty of law".

While passing the order on a petition moved by lawyers representing Sanjeev, who was arrested for conspiring to murder his cousin Neeraj in April 2017, additional district and session judge Ravi Ranjan also termed Dhanbad jail superintendent Ajay Kumar's reply to a show cause notice as unsatisfactory.

Sanjeev's lawyer Md Javed said, “The jail superintendent, Ajay Kumar, was physically present during the hearing and the court ordered him to transfer back Sanjeev to Dhanbad jail at once in order to ensure the majesty of law. The court said that nobody was above the law whatever post he/she may hold... ."

Sanjeev was arrested by Dhanbad police on April 11, 2017 as a key conspirator in the Niraj Singh murder case of March 21, 2017. He was transferred by the Dhanbad jail administration on February 21, 2021, citing security reasons, to Dumka Central Jail.

Hours before the court issued the orders on Thursday, the district unit of the BJP staged a demonstration at Randhir Verma Chowk, protesting the shifting of the former MLA of Jharia. They accused the state government of working with a sense of revenge to "murder of democracy".

Ragini said, "My husband's transfer was a political conspiracy of the government, effected a day after we petitioned the court for ordering the jail administration to allow treatment for his ill health."