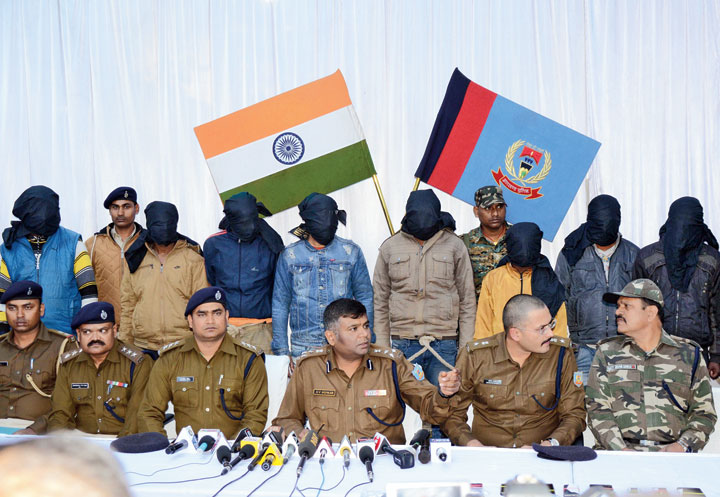 Police on Tuesday arrested 11 men from Ranchi and Latehar who the cops said used to extort money from coal traders coming to different collieries of the state.

Seven firearms with 70 rounds of ammunition, five motorbikes and 12 mobile phones were recovered from their possession, South Chotanagpur deputy inspector-general of police (DIG) A.V Homkar told the media during a news meet at his office in Doranda.

The DIG said all the 11 arrested men were associated with the Aman Shrivastava gang, active for the last several months in the business of extortion.

Asked how the breakthrough came, Homkar said: “The breakthrough came after a SIT (special investigation team) comprising superintendents of police of Ranchi, Latehar, Ramgarh and Hazaribah was constituted after getting regular information of extortion calls to coal traders in Latehar and neighbouring districts. Raids were conducted. The first catch was Mukesh Kumar Saw, who disclosed the names and addresses of the other accused. Sao is a notorious criminal and is accused in as many as nine cases of extortion and Arms Act registered against him in Hazaribagh and Latehar.”

Asked about the kingpin, DIG Homkar said: “Kingpin Aman Shrivastava is yet to be arrested. He is the brother of Sushil Srivastava, who has already been killed in a gang war.”

Asked if extortion money had been recovered from the possession of the 11 arrested men, Homkar replied in the negative.

He shared details of some of the crimes the gang had committed in 2018 and 2019.

“The gang in December last had opened fire on Ravi Ganjhu in Chandwa. In the same month, the gang had shot dead Yugal Ganjhu, a coal trader. In July last year the gang had injured an engineer of Hardeb Construction Company at Urimari in Latehar.”