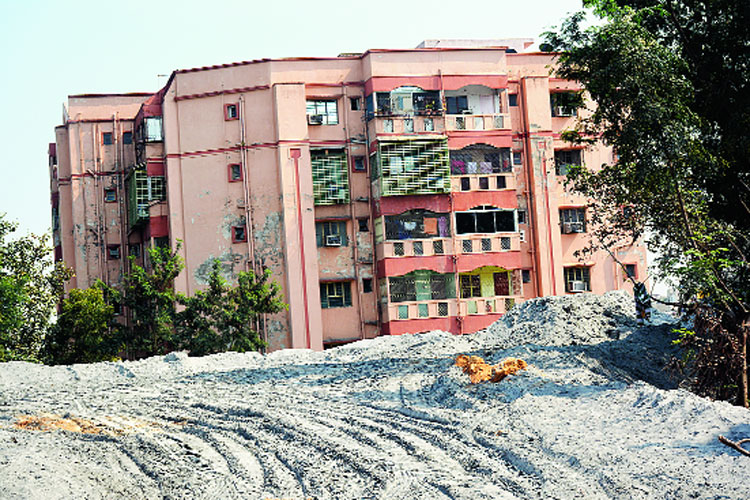 Families living along Marine Drive near Anil Sur Path in Uliyan, Kadma, are battling respiratory problems owing to reckless dumping of fly ash for the past one month.

The fly ash is mostly wheeled in past midnight and the tallest mound has now reached the height of the second floor of an adjacent G+5 residential building, Karan Apartments, where many senior citizens live.

“They began dumping fly ash in mid-January. We first thought Jusco, which maintains Marine Drive, was planning some infrastructure work. Later, we came to know that Jusco is not involved and we don’t know who is. Breathing has become a challenge with thick layers of dust in our homes. We have complained to the local police, but nothing has happened so far,” said Amaresh Banerjee (71), a retired Tata Steel official.

“Most of us here are ageing. The dust is causing serious health problems. We suspect police are hand in gloves with those dumping fly ash. Hence, we approached the local MLA (Roy) who personally visited the site last week,” said T.K. Sinha (72), a retired JUVNL (then JSEB) official.

The fly ash mounds currently cover an area of over 3,000sqft near Karan Apartments, but they have affected nearly half a dozen other residential buildings in the area.

Minister Roy said he had brought the matter to the notice of East Singhbhum deputy commissioner Amit Kumar and requested immediate action. “Fly ash is posing health risks for residents. It is surprising that police, despite receiving specific complaints, did not act. Patrolling teams man the Marine Drive. How come unauthorised dumping continues?” Roy added.

Kadma OC Jitender Thakur feigned ignorance. “I have not received any complaint in this connection so far,” he said.

“I had asked Dhalbhum SDO Chandan Kumar to visit the site following the minister’s request. The SDO has submitted a report. We will not only remove fly ash from the area, but also identify the person or agency responsible for dumping it in a residential area. Suitable action will be taken,” he said.