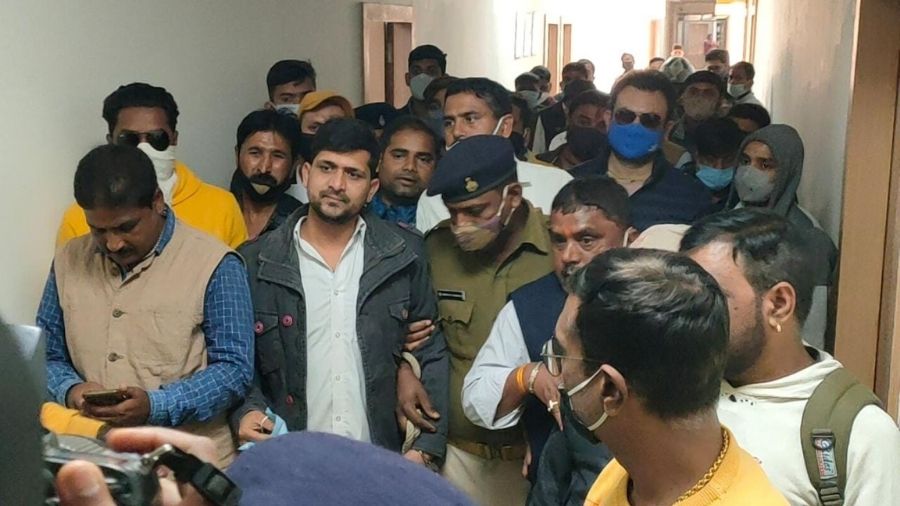 Bhariav Singh, a prime accused in the case concerning the attack on the pilot car of chief minister Hemant Soren’s convoy at Kishoreganj chowk on Monday evening surrendered in Ranchi civil court on Thursday noon after which he was sent to 14-day judicial custody.

Singh was among the 72 named in the FIR in the case.

Ranchi police have been conducting raids since the last two days to nab culprits named in the case of rioting on the basis of CCTV footage. On Thursday, however, Singh appeared before the court of justice Abhishek Prasad and surrendered.

On Monday evening, massive anti-government protests erupted at Kishoreganj on VIP Road in Harmu for deteriorating law and order after the headless body of a young girl was recovered in Ormanjhi the day before. During the protest, some turned rogue and resorted to vandalism. A police constable was also injured as a result.

Talking to reporters at court premises after the surrender, Singh said, “No one intended to attack the CM’s convoy. In fact, I, along with others, participated in the protest to fight for justice for a young girl who was abused and killed in a brutal manner in Ormanjhi.”

Singh, according to police sources, is associated with a rightwing outfit. But they would not confirm speculation that Singh was linked to the Bajrang Dal in Ranchi.

Police said close to 30 people had been arrested since Tuesday in connection with the attack on the CM’s entourage. On Wednesday, DGP M.V. Rao also suspended officer in-charges of Sukhdevnagar and Kotwali police stations after criticism that the violence exposed poor security arrangements in the Jharkhand capital at a time when the Opposition BJP has been criticising the government for “growing lawlessness” across the state.

Police are yet to make a breakthrough in the murder case. They have failed to establish the identity of the girl even after announcing a reward of Rs 50,000 for any information that may help crack the case.