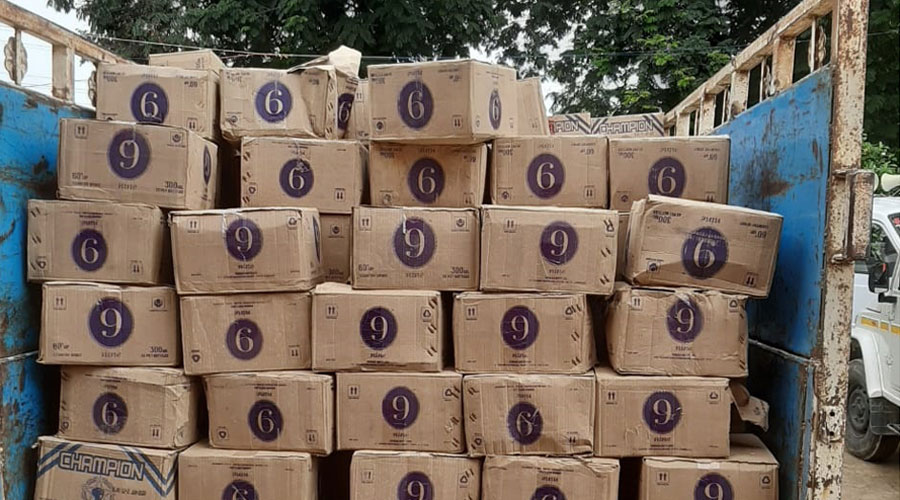 Harihurganj police in Palamau recovered and seized a huge consignment of liquour near the Bihar border on Thursday.

The consignment had thousands of bottles of alcohol which was being smuggled to Bihar.

Police have stepped up border checks before the Bihar Assembly elections.

SDPO Shambhu Kumar Singh said as the election gets nearer, smuggling of illicit wine will be rampant which they are determined to foil.

Singh said along with the illicit wine police have recovered a huge consignment of government rice meant for the public distribution through PDS shops.

The wine and government rice were clandestinely stocked in a godown owned by Umesh Sao, a  mukhiya and PDS shop owner.

Sao will also be charged for stocking illicit wine with the purpose of inter state smuggling.

Vinoba Bhave University will be conducting its final year examination from Friday across five districts.

Around 30,000 undergraduate students are expected to appear for the exam.

The exams were delayed by two months due to the Covid induced lockdown.

There are 25 centres in Hazaribagh, Koderma, Chatra, Ramgarh and Giridih.

Pro-vice chancellor Ajeet Sinha said the varsity had left no stone unturned to conduct the examination by keeping all the Covid norms in mind. He said distance between two examinees will be three feet.

Classrooms will be sanitised and it is mandatory for students to wear masks and gloves.

"We have conveyed all these guidelines to principals in a meeting recently",said Sinha.

Vice chancellor Dr. Mukul Narayan Deo said he has passed clear instructions to the principals. He said he had inspected the arrangements and found it satisfactory.

Protest against changes in labour laws and farm bill

Activists of CPI (M) on Thursday took out a procession at Randhir Verma Chowk against the new farm bill and also against the proposed changes in  the labour laws.

The protesters said at a time when common people are facing the problem of economic constriants and recession during the pandemic, the central government is bringing new anti people bills to add to their woes. They claimed the proposed changes in the labour laws will benefit the capitalist forces and will deprive the common workers of all their rights.

No tolerance to illegal mining in Bokaro

Deputy commissioner of Bokaro, Rajesh Kumar Singh on Thursday asked the district mining officer and police officials to ensure that there is no illegal mining and transportation of minerals including stone, sand and coal in the district.

A meeting of the district mining task force was held under the chairmanship of the DC.

Information related to stone, sand, brick kiln and coal mining lease located in the district was given by the district mining officer at the meeting.

The circle officer and divisional forest officer have been asked to give a point-wise report of the sand ghats.

The CCL and BCCL management should carry out regualar checks in their authorised areas to stop illegal mining and transportation of coal.

The DC said illegal mining and transportation of minerals will not be tolerated in the district.

Barwaddah Police on Thursday seized 182 bottles of liquor from an SUV during a vehicle checking drive conducted at Kalyanpur area.

The police arrested three persons, all residents of Patna, on the charges of smuggling illicit liquor to Bihar.

Officer in charge of Barwaddah Police station, Ganga Sagar Upadhyay said, "we received a tip off regarding the liquor being smuggled from Durgapur in Bengal to Bihar through national highway-2 and organised the vehicle checking drive in various places of the district on the basis of which the liquor consignment was found lying hidden beneath the seat of the SUV and arrests were made".