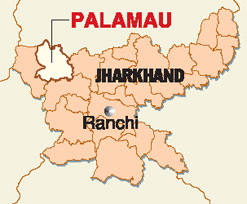 Ranchi, Nov. 2: An alleged land scam has cropped up in Palamau district that threatens to delay Hindalco's ambitious Kathautia mining project, prompting the state government to order a high-level probe into the illegal transfer of forestland.

Palamau deputy commissioner K. Srinivasan has already suspended a revenue department employee, Vijay Kumar Singh, for his alleged involvement in the illegal transfer of at least 82 acres of forestland under Kathautia mining area to Usha Martin.

Kathautia mines were in the possession of Usha Martin before the Supreme Court scrapped all earlier allocations in the wake of infamous coal scam. The mines were, subsequently, auctioned out to Hindalco Industries Ltd, an Aditya Birla group company, early this year.

Sources claimed that the land scam came to light after Hindalco got the vesting orders/allotment orders for the mines from the Union coal ministry in March, prompting chief secretary Rajiv Gauba to order a detailed probe into the matter a couple of months ago.

Subsequently, in his probe report submitted last month, then Palamau commissioner N.K. Mishra suggested that the nature of the 82 acres of jungle-jhari (deemed forest category land) in Kathautia mining area was suppressed to facilitate the illegal transfer of the land to evade the scanner of the Union ministry of forests and Environment (MoEF).

"Action has already been taken against one revenue karmachari (Vijay Kumar Singh) in this regard. He was involved in processing the related files of transfer of deemed forest category land through illegitimate means," DC Srinivasan told The Telegraph over phone from Palamau.

And if sources are to be believed more heads are expected to roll in near future for their alleged involvement in the scam.

Explaining the technical complexities of the matter, Srinivasan maintained that now - as the land transfer scam had come to fore - Hindalco, or for that matter any company, needed to get a forest clearance for the concerned 82 acres from the MoEF first before it could start any mining activities in Kathautia.

Interestingly, Union ministry of forests and Environment, in April, had given the environmental clearance for opencast mining on the 938.27 hectares, spread over Kathautia, Kajri, Garikhas, Palhekhurd, Sika, Sakhui and Batsara villages.

"That time, the concerned 82 acres were considered as non-forest land. So, now, as the 'true' nature of the land has come to light, Hindalco will have to seek the forest clearance afresh. This will certainly lead to inordinate delay as forest clearance will take time," said a source.

A senior Hindalco official, not willing to be quoted, said that they were assessing the things and had been in consultation with the state government in the matter.

The coal from Kathautia mines is likely to feed the captive power plant of Hindalco's Mahan Aluminium project in Madhya Pradesh.