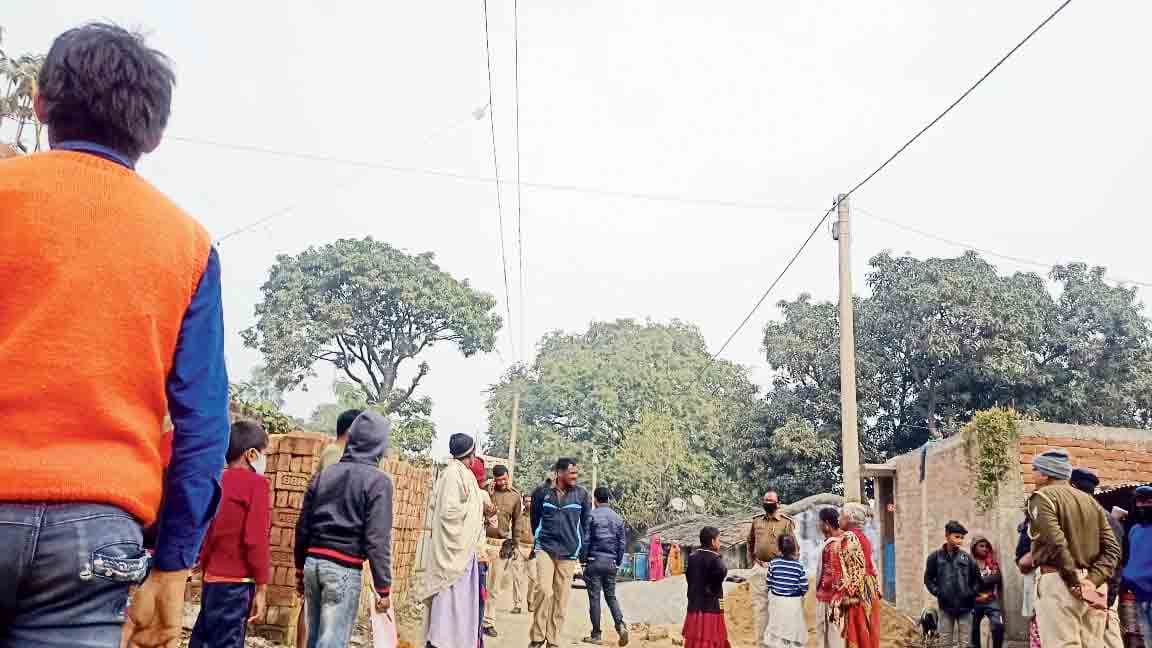 Police and villagers at the place where the minor was tied and assaulted in Sahibganj
Bhola Prasad
Animesh Bisoee   |   Jamshedpur   |   Published 12.01.22, 12:19 AM

A 16-year-old boy was tied up in a village near to his house and thrashed by irate villagers on the accusation of stealing a smartphone at Bartalla village in the Sahibganj district of Jharkhand.

The villagers had tied the boy on Monday afternoon and after a lot of persuasion from police, the tribal villagers agreed to release the boy on Tuesday forenoon, nearly 24 hours after keeping him hostage.

Significantly, this is the fourth incident of mob justice after the Jharkhand Assembly passed a bill against mob lynching in December last year, which is awaiting the assent of the governor and the President for being enacted into law with stern provision for life imprisonment for murder by mob.

On January 5, 2022, Sanju Pradhan was beaten and burnt to death by villagers in Simdega district while in Sisai in Gumla two brothers Sanjay Oraon and Ajay Oraon were beaten after an allegation of witchcraft against their mother, and again on Saturday a Muslim youth suffering from manic depression was beaten up, forced to squat and lick spit, made to chant Jai Shri Ram in Dhanbad.

Police sources confirmed that the boy did not have external injuries but they did admit of the boy being beaten by the villagers.

Incidentally, the boy is also a resident of the same village.

According to reports, the villagers were angry and wanted to punish the minor in the village panchayat on Tuesday under the leadership of Bartalla village head Sanji Hembrom. However, Sunita Devi, the mother of the minor, reached the police station and informed them about the incident, which led to police rushing to the spot.

After a lot of persuasion the police managed to rescue the minor and sent him for medical treatment at Sahibganj Sadar Hospital from where he has been discharged.

Over 15 villagers had taken the minor, a resident of neighbouring Mahadevaran village, on suspicion of his involvement in mobile theft on Monday afternoon.