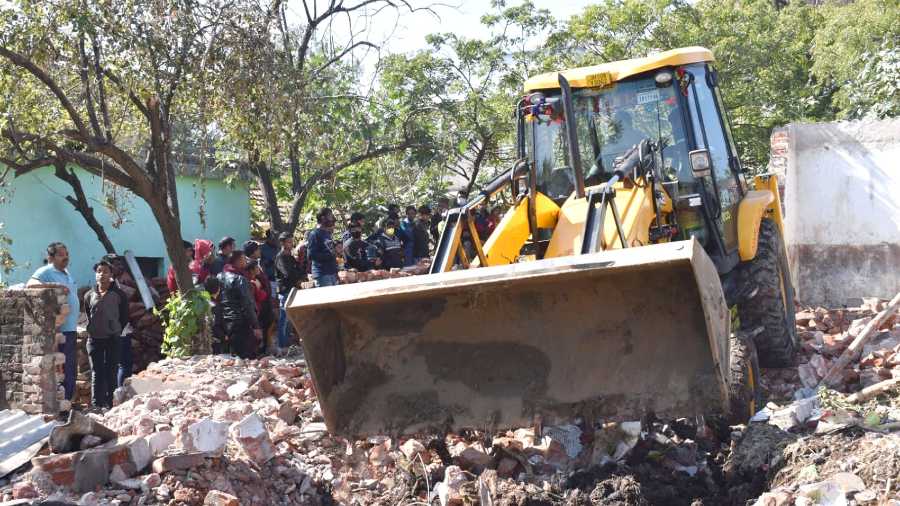 An anti encroachment drive in progress at Pandarpalla-Wasseypur locality in Dhanbad.
Gautam Dey
Our Bureau   |   Published 04.01.22, 12:33 AM

Dhanbad: Dhanbad Rail Division launched a massive eviction drive at Wasseypur Pandarpala area during which more than 100 illegal structures including shanties, makeshift shops lying on the railway land were demolished.

The railway engineering team accompanied by a large number of Railway Protection force officials reached the site this morning at around 9 am and carried out the demolition with the help of heavy earth movers.

Though local residents requested the railway authorities to defer the eviction till the peak winter season fades away. They even asked the authorities to consider the pandemic situation. But the railway authorities were not convinced and carried out the eviction to have enough land to develop the 1839 km for the eastern freight corridor which is being developed through several states including Punjab, Haryana, Uttar Pradesh, Bihar, Jharkhand and Bengal.

Speaking on behalf of local residents, Mumtaz Quraishi, social activist of Wasseypur, said, “We are not against development, But the short notice period was not enough for these people to relocate in this weather and pandemic.”

“We want the railway authorities, local administration and government to rehabilitate them,” he said.

NH-33 widening project gets a boost

Work in progress for the widening of NH-33 near Jamshedpur.
Animesh Sengupta

Jamshedpur: The ambitious NH-33 widening project got a boost on Monday as the Dalma wildlife division gave its nod for forest clearance for the railway overbridge (ROB) that will be set up near Chandil.

The proposed ROB which is part of the NH-33 widening project is meant to smoothen the volume of vehicular traffic at Pata that lies between Calcutta and Ranchi.

Revealing about the development, Dalma wildlife division's divisional forest officer, Abhishek Kumar said, “We recommended for the NHAI's ROB project on the NH-33 near Chandil in the public interest. As per the recommendation made to the state forest department authority, 0.57 hectare of forest land can be utilised for the ROB which is a part of the NH-33 widening project.”

A major portion of the proposed ROB falls under Seraikela forest division, which is yet to make any recommendations to this effect.

Seraikela DFO, Abhishek Bhushan confirmed that forest land measuring 1.6 hectares will be utilised for the proposed ROB on the NH-33.

Significantly, forest clearance for the stretch along Jamshedpur and the foothills of Dalma is pending.

“The NHAI will have to obtain forest clearance for the stretch along Jamshedpur separately, but we are yet to get any application to this effect as yet,” Kumar said.

Verma was posthumously awarded Ashok Chakra for his valour. He had sacrificed his life to foil the attempt of criminals wanting to rob the Bank of India, Hirapur branch on January 3, 1991.

Verma, has rushed to the bank alone on getting the information about the bank heist. He took on the robbers single-handedly and died a valour’s death only after busting the dacoits.

Speaking at the event organised by the Randhir Verma Memorial Society, Rita Verma, former union coal minister, who is also the martyr’s wife said, “He set an example of supreme sacrifice for the sake of service and dedication for duty which will be very difficult for the generations to forget.”

A separate programme was organized near IIT (ISM) gate by Sahid Shymal Chakraborty Smarak Samiti, to pay tribute to an IIT (ISM) employee, who also died during the same incident. He was a victim of the bullets fired by the dacoits.

Janardan Prasad, Politburo members of CPI (ML) who was present during the occasion as Chief guest said, “Though both Randhir Prasad Verma and Shyamal Chakraborty laid down their life in the same incident, the government is yet to recognize the sacrifice of the Shyamal Chakraborty till date.”