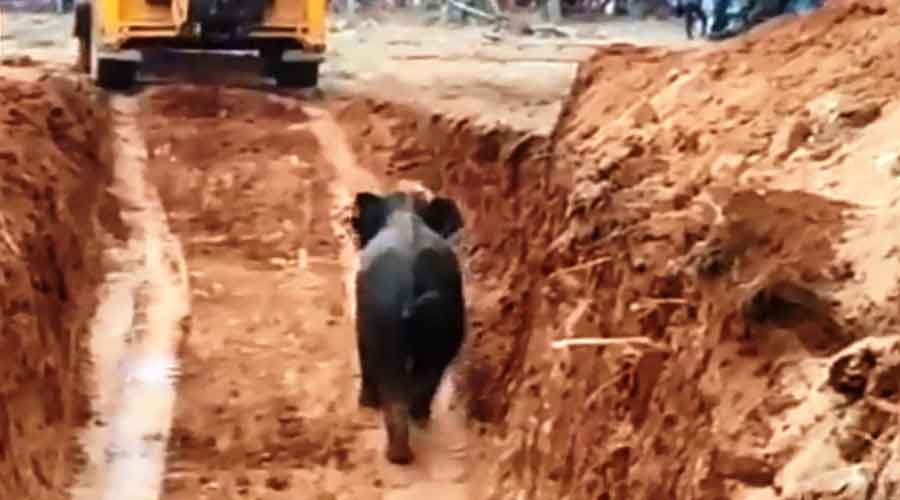 Bokaro: A calf that fell in a deep well has been rescued by the forest department team at Saria Block of Giridih on Monday.

The calf is said to be the member of a herd of 22 elephants wandering the jungle of Saria Block for the past few days. Forest Ranger of Saria, Shyam Kumar said, “The herd of elephants have calves. The herd had come near the well. There was a banana tree close to the embankment of the well, we believe that the calf which had fallen in the well might had skidded while approaching the tree. However, we have rescued the calf.”

After coming out of the well, the calf ran towards the village. The officials of the forest department are trying to drive the calf towards the herd. Rajesh Pandey a villager said that they heard calf trumpeting around 2 am.

On Thursday night, the same herd of elephants killed a young man in the area. The forest department has sounded an alert in the area. 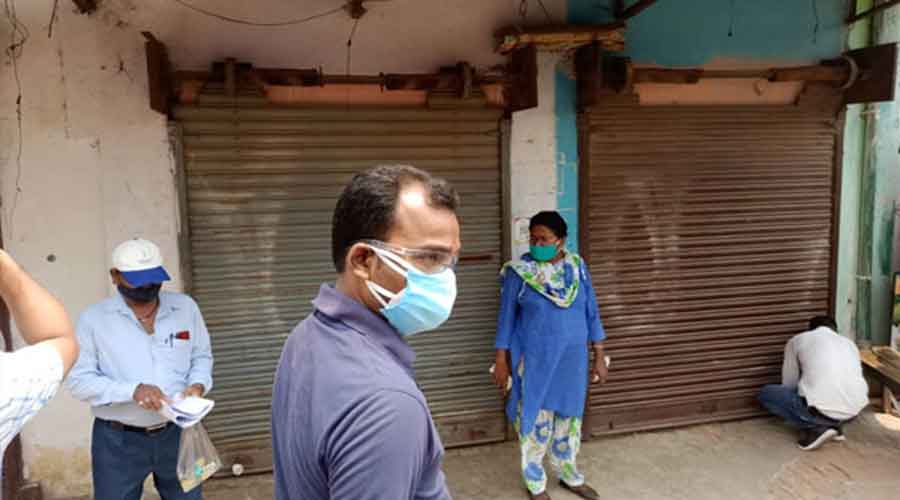 A team of government officials seal shops in Barkatha on Monday.
Picture by Vishvendu Jaipuriar

Hazaribagh: A team of officials in Barkatha of Barhi subdivision on Monday sealed several shops immediately after getting information about businessmen flouting lockdown norms.

“We had sealed ten shops and process is on to lodge FIR against them,” they added. 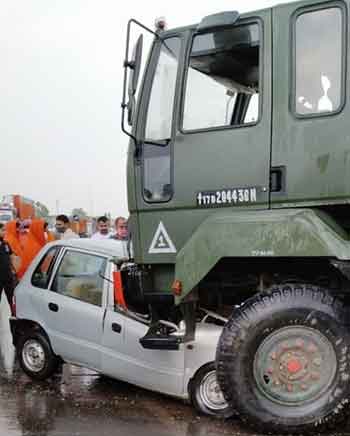 The two vehicles after the accident in Hazaribagh on Monday.
Picture by Vishvendu Jaipuriar

Hazaribagh: A wagon carrying oxygen cylinders hit a car killing three on the spot in Konhara area between Barhi and Bagodar in Barkatha, 68km away from Hazaribagh district headquarter.

Police said the accident occurred on GT road as both vehicles coming from opposite direction took the same diversion resulting in the incident. The three persons including a woman sitting in the car died on the spot. Police have sent the bodies for post mortem to Hazaribagh medical college and hospital.

Dhanbad: The family members of a Covid patient who died during treatment at Central Hospital of BCCL at Jagjivan Nagar of Dhanbad on Monday created a ruckus at the campus alleging medical negligence.

A team of police and Central Industrial Security Force (CISF) controlled the situation and promised the family members of the deceased of a fair probe.

A Lodna colleiry employee of BCCL was admitted this morning in the Central hospital on Monday morning after his health condition deteriorated due to Covid but he died in the afternoon during the course of treatment.

Family members of the deceased claimed that the patient was not attended properly by the doctors in the hospital. They further charged that he died after being administered an injection in the hospital.

Dhanbad: Dhanbad Deputy Commissioner Uma Shankar Singh on Monday instructed the circle officers of Dhanbad and Nirsa to file FIRs against four doctors under the disaster management act for not partaking as a Covid frontline health worker.

Singh said that these four doctors had been instructed to join Covid duty on April 26 and were given a 24 hour ultimatum to join but they did not respond to the notices showing severe negligence of services.