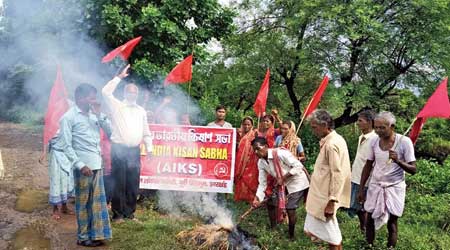 Farmers backed by the Left burnt effigies of Haryana chief minister Manohar Lal Khattar and the BJP-led central government across Jharkhand on Monday to protest the death of a farmer who was said to have suffered injuries in the police lathicharge in Karnal and gear up for the Bharat Bandh on September 25.

The impromptu agitation called by the Jharkhand Rajya Kisan Sabha (an affiliate of the CPM’s farmer wing All India Kisan Sabha) with support from the Jharkhand Rajya Kisan Sangharsh Samanvyay Samity (an outfit formed last year to coordinate the farmers’ agitation in Jharkhand against the central farm laws) saw peasants coming out in rural pockets in almost all the 24 districts to burn effigies of the Khattar government in Haryana and the Narendra Modi government at the Centre and shouting slogans demanding repeal of the farm laws and action against the official who ordered the lathicharge on farmers.

“We took the decision on Sunday evening that we need to show solidarity with the farmers who have been beaten and injured by Haryana police on the order of the sub-divisional magistrate and protest vehemently the death of Sushil Kajal who was assaulted repeatedly on the head by the police. Despite it being Krishna Janmashtami, a state holiday, we could manage to galvanise farmers to come out on the roads in 600 locations, especially in rural areas of Jharkhand,” said Sufal Mahato, state convener of the Samity.

Farmers assembled on the roads near block headquarters carrying banners of the Jharkhand Rajya Kisan Sabha and shouted slogans that the “martyrdom” of Sushil Kaajal would not go in vain.

“The BJP government wanted to quell the farmers’ agitation through force and assault. But through this agitation in Jharkhand and other states we want to send a message that such lathicharge on farmers would only strengthen our resolve to agitate more vigorously against the oppressive rule of the Narendra Modi–led BJP government. The agitation would continue till 2024 (when general elections are due) until our demands for the repeal of the three new farm laws are fulfilled. We will also show our might during the Bharat Bandh called to protest the lathicharge on farmers and observe 10 months of the farmers’ agitation at Delhi’s borders against the new farm laws,” said Praful Linda, a veteran CPM leader and member of the Samity, in Ranchi.

The farmers across the country have been seeking repeal of the three farm laws which they fear would pave the way for the dismantling of the minimum support price (MSP) system, leaving them at the “mercy” of big corporations. The Centre, however, has rejected these claims stating that the laws will only give farmers more options to sell their produce.

“As per the call of the Samyukta Kisan Morcha, we would be planning a strategy along with tribal outfits, rights activists and civil society organisations for the Bharat Bandh called on September 25 and ensure it becomes a success by blocking all important roads, highways and railway routes,” said Mahato.

Around 10 people were injured on Saturday when the police beat up a group of farmers on a national highway as they headed towards Karnal to protest against a visit by chief minister Khattar.