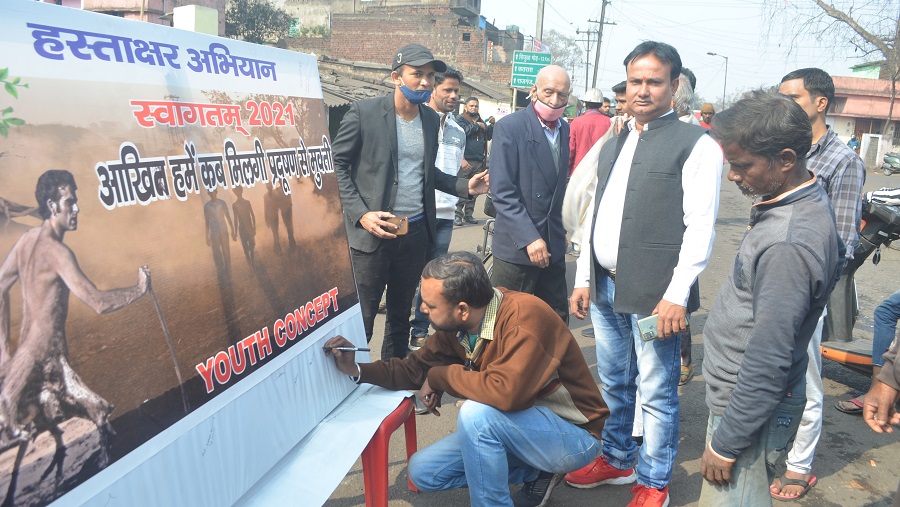 A group of Jharia youth, led by speech therapist Aklaque Ahmad launched an awareness campaign on Friday to draw the attention of authorities regarding air pollution resulting from coal dust air due to various practices like open cast mining.

The group, named Youth Concept, has been working on environmental issues since long. On Friday, it installed more than 25 flags, bearing messages from local residents to conserve the environment.

A signature campaign was also carried out during the programme, which began at the heart of Jharia town at Katras More. Owner of Deshbandhu Talkies, Dhanbad’s oldest single-screen cinema hall, Gopal Agarwal, and president of Jharia Coalfield Bachao Samiti Murari Sharma were present during the campaign.

Talking to The Telegraph Online, Ahmad said, “The basic aim behind the programme was to highlight the urgency for taking steps to contain pollution in Dhanbad. It has been named among the 102 cities and towns of the country under the national clean air programme, where air pollution is to be reduced by 35 per cent within three years.”

“The BCCL or the Dhanbad Municipal Corporation have taken no significant step despite promises of installing water sprinklers, green walling of the residential areas, ensuring coal transportation in covered vehicles among others,” Ahmad said.

The speech therapist added that the Dhanbad Municipal Corporation has not even utilised the Rs 3 crore fund to purchase dust sweeping machines. 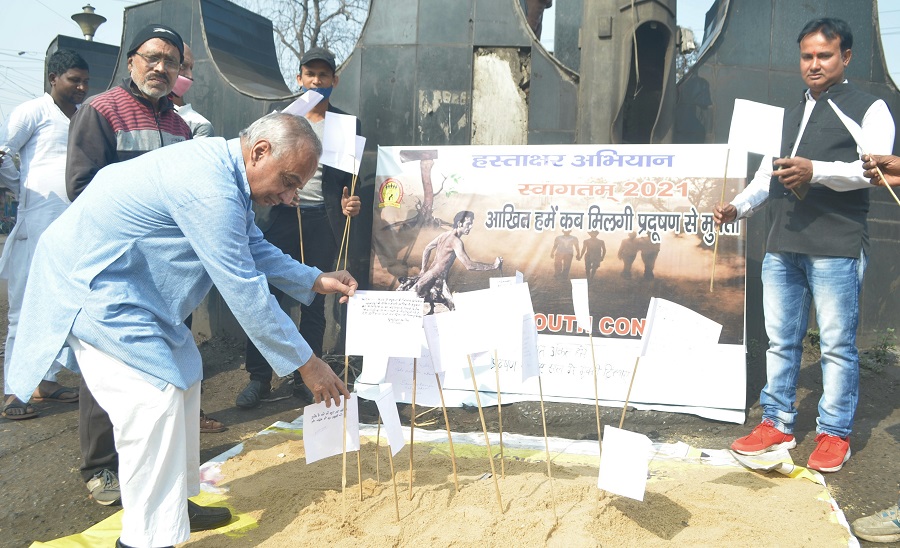 A man holding his opinion during the signature campaign against of Pollution at Katras Mor Jharia today.
Shabbir Hussain

“We organised the programme to draw the attention of the concerned authorities towards the plight of Jharia residents and wrote their messages on flags,” Ahmad said.

Messages like: “Jharia is most polluted town in the country, please take action about it” ; “pradushan ke karan logon ka swashya buri tarah prabhavit ho raha hai (pollution is causing ill-effect on our health)” ; “pradushan failakar BCCL hamare swasthya ke saath khilwad kar rahi hai (BCCL is playing with our health by polluting the environment)” ; “swagatam 2021 akhir  hamen kab milegi pradushan se mukti (Welcome 2021, but when will we get rid of pollution)” ; “Hemant uncle hamen pradushan se naye saal me mukti dilaiye (Hemant [Soren] uncle, get us rid of pollution this new year)” were displayed on flags to highlight the condition of the town.

Highlighting the aim of the programme, Roy said, “At a time when the nation is making progress, there should also be an effort to inculcate the feeling of patriotism among the masses so that they contribute to the progress of the nation.”

“Holding such programmes like taking an oath in the name of the nation provides an opportunity for the propagation of nationalist values for which our forefathers have sacrificed their life,” added Roy.