The Jamshedpur Notified Area Committee has not only put up posters, has also dug pits along riverbanks to prevent pollution from idol immersion 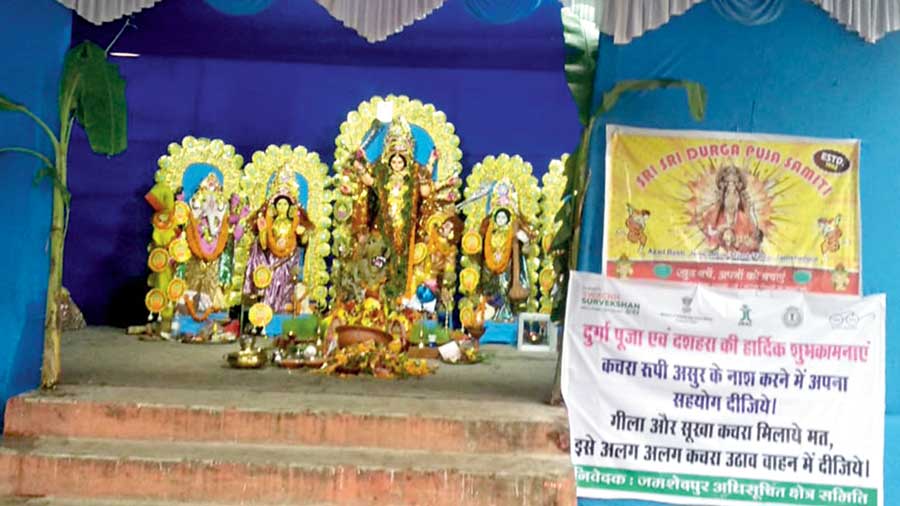 An urban body of Jamshedpur, which was ranked the best among cities in Jharkhand in the Centre’s cleanliness survey in 2020, has taken up the cudgels to spread awareness on river pollution and waste segregation during Durga Puja.

The Jamshedpur Notified Area Committee (JNAC) — the local urban body overseeing execution for the Swachh Survekshan — has not only put up awareness posters at all the well-known pandals but has also dug pits along the riverbanks to prevent pollution during idol immersion.

“We were ranked the best in Swachh Survekshan in Jharkhand and have to be a good example for other local urban bodies. Segregation of dry and wet waste continues to be a problem during doorstep garbage collection in residential areas. We decided to spread awareness about the problem during Durga Puja among residents. We also spread awareness among organisers and the public against pollution of waterbodies during idol immersion and sought support to our efforts in preventing river pollution,” said JNAC special officer Krishna Kumar.

Among the big cities, only Jamshedpur salvaged the state’s reputation by being adjudged the best medium city (with a population of 3-10 lakh) in the citizen feedback category. Overall, Jamshedpur ranked 13th in the country in Swachh Survekshan 2020.

“Our sanitation officers had been visiting all the Durga Puja committees in our command areas and educating them about the National Green Tribunal (NGT) directive on idol immersion and prevent river pollution. We have pasted posters at all major pandals (over 40), known to attract a large number of devotees, on the importance of segregating dry and wet waste and disposing of all puja paraphernalia in the specially dug pits along riverbanks and only immerse the idol in the river as per rituals,” said JNAC city manager Ravi Bharti.

The urban body along with Tata Steel Utilities and Infrastructure Services (formerly Jusco, the utility arm of Tata Steel) have dug pits along all major ghats of the Kharkai and Subernarekha rivers.

“The wastewater collected from the designated temporary artificial ponds/tanks/pits during immersion after ensuring on-site pre-treatment shall be discharged into or public sewers leading to sewage treatment plants/common effluent treatment plants,” the CPCB directive states.

“The CPCB forbids the usage of thermocol, plastic and plaster of Paris in idol making in its revised guidelines for idol immersion. However, most of the puja organisers do use it especially for decorations of idols. We have decided to take out all such prohibited items before the idols are immersed in the rivers and collect it in the pits dug up for this purpose. The items would be then disposed of in effluent treatment plants,” a JNAC official said.