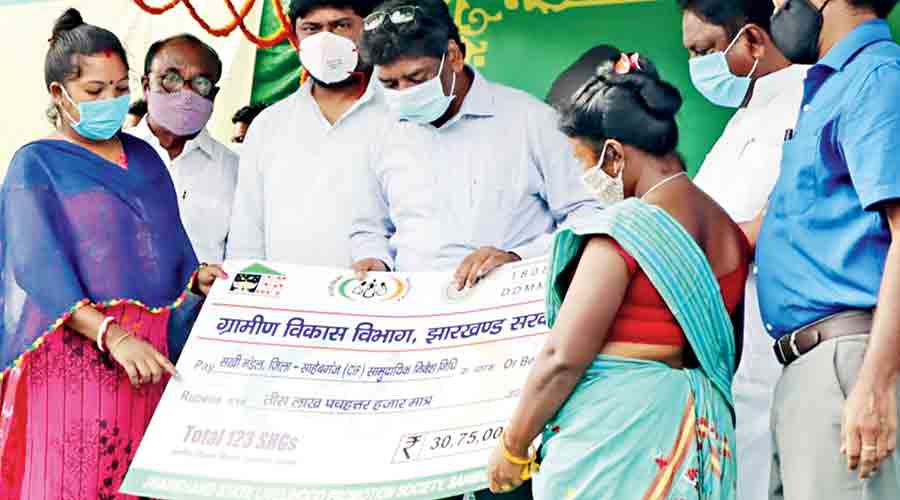 Hemant Soren distributes assets to a beneficiary at Barhait on Monday.
Picture by Shabbir Hussain
Animesh Bisoee   |   Jamshedpur   |   Published 26.10.21, 03:15 AM

The assertion from Hemant Soren, the JMM working president, comes close on the heels of his message to the JMM district presidents and district secretaries on Friday at Ranchi to let party cadres inform masses about government schemes.

“Everyone should get the benefit of the development plans and welfare schemes of the state government. The district administration and elected representatives should ensure that these schemes get wide publicity at the grassroots level in villages. The administration should hold meetings at villages and panchayats and inform people about schemes and enable them to get it benefits,” said Soren at a function organised in Hisaguttu in Barhait block of Sahebganj district around 2.30pm.

Barhait is the home constituency of the chief minister.

An almost identical address was given at another public function in Boarijor block of Godda district, two hours later. “The Covid cases are on the decline and the government has now started speeding up developmental and infrastructural strengthening activities in the state. We managed to fight the Covid situation in a better manner with our resources and now are focused on development activities. The district administration should ensure that people at the last mile get the benefit of the schemes and that can happen only if they are aware of the schemes,” said Soren.

Interestingly, the chief minister had also stressed people’s connection with the JMM district presidents and secretaries at the party organisational meeting on Friday at his residence in Ranchi and directed the party workers to create awareness about the government schemes and improve people connection.

Party insiders claimed that the strategy is to make people aware about government welfare schemes ahead of the panchayat polls scheduled later this year.

Soren in the address at both Barhait and at Godda spoke at length about the dhoti-saree schemes for the poor ration cardholders, the new schemes to provide employment through MGNREGA schemes like Birsa Harit Gram Yojana, Nilambar Pitamber Jal Samridhi Yojana, Shaheed Poto Ho Khel Vikas Yojana, Phoolo Jhano Aashivard Yojna and Mukhyamantri Pashudhan Yojana and asked the villagers to join these schemes and take full benefits.

He also announced that there would be no need of ration cards for availing widow pensions.

Soren also informed about government plans of giving eggs six days a week to children in government schools, and universal pension for those above 60 years of age.

Soren also inaugurated schemes worth Rs 34.83 crore including a power sub-station at Godda and distributed assets worth Rs 8.50 crore to beneficiaries of government schemes and laid the foundation stone of schemes worth Rs 36 crore.

While in Sahebganj, Soren laid foundation stones of 27 schemes worth Rs 18.45 crore and inaugurated a project worth Rs 30.21 lakh.