Health centre with OPD facility to come up at Belgarhia 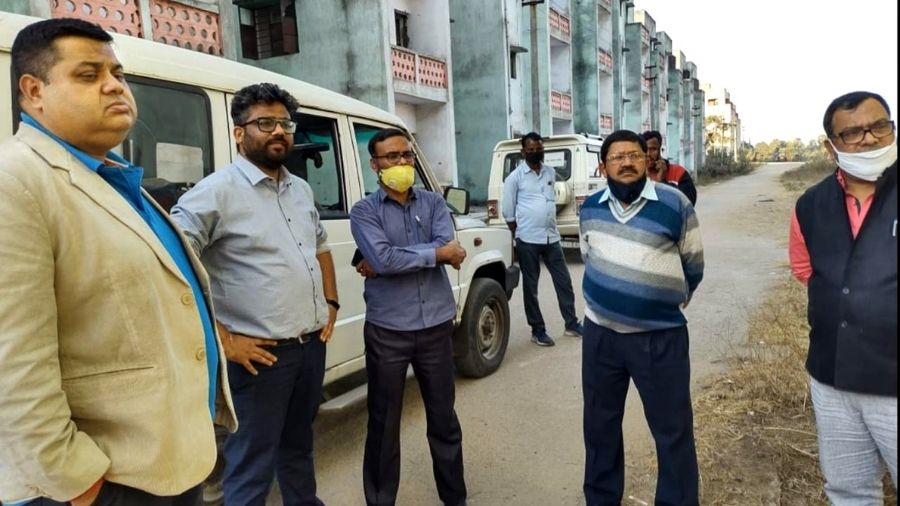 A team led by Civil Surgeon Dhanbad, Gopal Das (in blue sweater) along with Dhanbad Health Department, JRDA and other officials visit Belgarhia Township in Dhanbad to marked the site for the Health Centre on Tuesday.
Picture by Gautam Dey
Praduman Choubey   |   Dhanbad   |   Published 05.01.21, 10:02 PM

Aiming to provide all basic facilities to the people who were rehabilitated from different underground fire-affected areas to newly developed quarters of Jharia Rehabilitation and Development Authority in Belgarhia, Dhanbad deputy commissioner Uma Shankar Singh has formed a committee last week to explore the prospects of improving basic facilities in the colony.

On Tuesday, he has identified a site to establish a health centre with OPD facility.

The committee also discussed the manpower required for the operation.

Uma Shankar, during his visit to Belgharia township on December 21, came to know about the lack of basic facilities including health care.

He said the new health centre with OPD facility will be established at the earliest with 24x7 deployment of manpower.

He further said that an ambulance will always be there at the centre to make it easier for the residents to reach other hospitals during any emergency.

“The team led by the civil surgeon will also prepare a medical calendar for the centre to organise periodic camps for diabetes and other ailments,” said Singh.

During the inspection, he also came to know about the irregular water supply in the colony. He had instructed the JRDA authorities to constitute a committee of residents to look after the water and electricity supply.