Fallout of Stan Swamy’s persecution highlighted at release of memoirs

It is time for the State to understand the international shame brought to our country by the persecution of the undertrial: Bishop 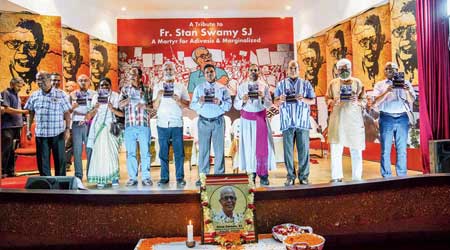 The State should understand that the persecution of Father Stan Swamy, the Jesuit priest and rights defender who died in judicial custody last month, had brought international shame to the country, Ranchi Auxiliary Bishop Theodore Mascarenhas has said.

“Father Stan has become an international figure after his death and it is time for the State to understand the international shame brought to our country by the persecution of the undertrial. We hope that the government and the political representatives wake up after this episode,” Bishop Mascarenhas said on Tuesday.

The bishop was speaking at an event where the memoirs of Fr Stan, I am not a silent spectator: Why Truth has become so bitter, Dissent so intolerable, Justice so out of reach, was released by the central zone Jesuit province on the Ranchi campus of the Xavier Institute of Social Service (XISS). The book, described as an “autobiographical fragment, memory and reflection”, was released in Tamil Nadu, too.

“Fr Stan has made us proud, as he carried out the message of Jesus and fought for people’s rights and truth. He stood for the rights of the Adivasis and the undertrials,” Bishop Mascarenhas added.

The cover of the book

Fr Stanislaus Jerome D’Souza, SJ, president of the Jesuit Conference of South Asia, said in his address delivered as the guest of honour: “There are two types of memories, one which happen and one which are made. We all stand here because Fr Stan’s memory has touched us and moved us. His enemies want us to believe that he was against the law… but the truth is he believed in the court of law and died fighting for the poor and the marginalised.”

Welcoming the gathering, Fr Joseph Marianus Kujur, director of XISS, said: “The title of the memoirs is very apt because we all know that it is indeed true that Fr Stan was never silent when he was alive. He is not silent even after his death. Through his writings, friends, associates and admirers, his voice is still reverberating everywhere. We hope to keep his spirit alive amongst us as we come together to release his memoirs.”

Fr P.M. Tony, director of Bagaicha (the institution founded by Father Stan), discussed the scholarship of Rs 25,000 to be given in the name of Fr Stan to the children of two tribal undertrial prisoners.

“Fr Stan had been conferred the Mukandan C. Menon Award last year and since Father was in prison, it was collected by Father Joe Xavier. Fr Stan expressed the wish that the amount be distributed among the children of undertrial prisoners. We have selected two deserving children — Kiran Barla, a seventh grader at Rajkiya Madhya Vidyalaya at Lapung in Ranchi, and Sandhya Oraon, a sixth grader at St Mary’s Girls Middle School, Kanke,” said Fr Tony.

Development economist and social activist Jean Drèze said in a video message: “Fr Stan, while leaving for prison, had said that he is going to pay the price for fighting for social justice. The right tribute would be to carry forward his movement for social justice.”

Mihir Desai, Fr Stan’s legal counsel and senior advocate in Bombay High Court, pointed out: “He was penalised not for any crime he committed but for raising his voice for justice to Adivasis and the poor.”

In the morning, the ashes of Fr Stan were interred at the Jesuit Cemetery at Mango in Jamshedpur.

Fr Xavier Lakra, former director of Bagaicha, described Fr Stan as one of the tribal martyrs. "He used to seek blessings for tribals daily and dedicated his life to the well-being of tribals, Dalits and the marginalised. A martyr's blood doesn't go in vain," Fr Lakra added.

Indian history through the prism of dissent