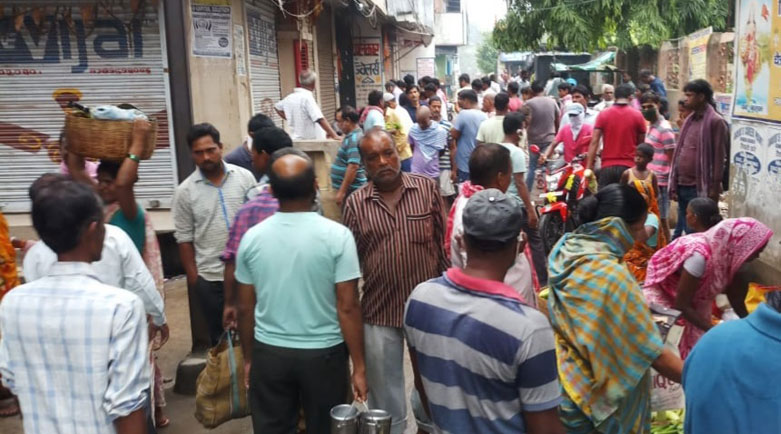 More than 200 vegetable and fruit sellers of Gomoh, who were earlier evicted from the Gomoh station road on Tuesday, drove away vegetable vendors of another area in the Purna Bazaar area in the morning.

The shopkeepers, who were irate over the displacement following an anti-encroachment  drive carried out by the railway police three days ago, were demanding their rehabilitation before allowing any outsider to carry out trade in their area.

Jagdish Chaudhary, a resident of Gomoh Railway Colony, told The Telegraph Online on Tuesday, “We had raised the issue of unplanned eviction  of the shopkeepers posing  the risk of losing their livelihood at a time when the income of every person is affected due to recession during the pandemic. We met Tundi MLA Mathura Prasad Mahto and divisional railway manager of Dhanbad, A.K. Mishra on Monday. Wedemanded permission to ply our trade on either or the two railway sites, including near the sick line area of Gomoh or near the Loco Bazar area and we are awaiting the response of the railway authorities to begin trade.

One of the protesting fruit sellers said, “We were eking out a living through our shops but the encroachment drive turned us penniless and we want resettlement at an alternative site where trade can be carried without any disturbance.”

Sneham Sinha, the district coordinator of National Association of Street Vendors of India, said, “We will also meet  the railway authorities under the banner of our organisation and demand permission for carrying out trade.”

“We had been raising the issue of unplanned eviction of the vendors from various parts of the district during the anti-encroachment drive . We wanted speedy implementation of the plans to carry out construction of vending zones in the district equipped with all the facilities like drinking water, proper lighting and  urinals where people can carry out their business without any disturbance,” said Sinha.

“On one hand, the government is providing loans worth Rs 10,000 to each of the street vendors to help them cope with the lockdown. On the other hand, the officials of the government department are depriving them of their source of livelihood,” Sinha added.

Tundi MLA Mathura Prasad Mahto said, “We had raised the issue with the railway authorities and they have given some positive assurance to allow the shopkeepers to carry out trade without establishing any permanent structures and we are expecting their nod in this regard in a day or two.”