Daltonganj topped the state’s Celsius chart with the mercury rising to 44.1°C, four notches above normal 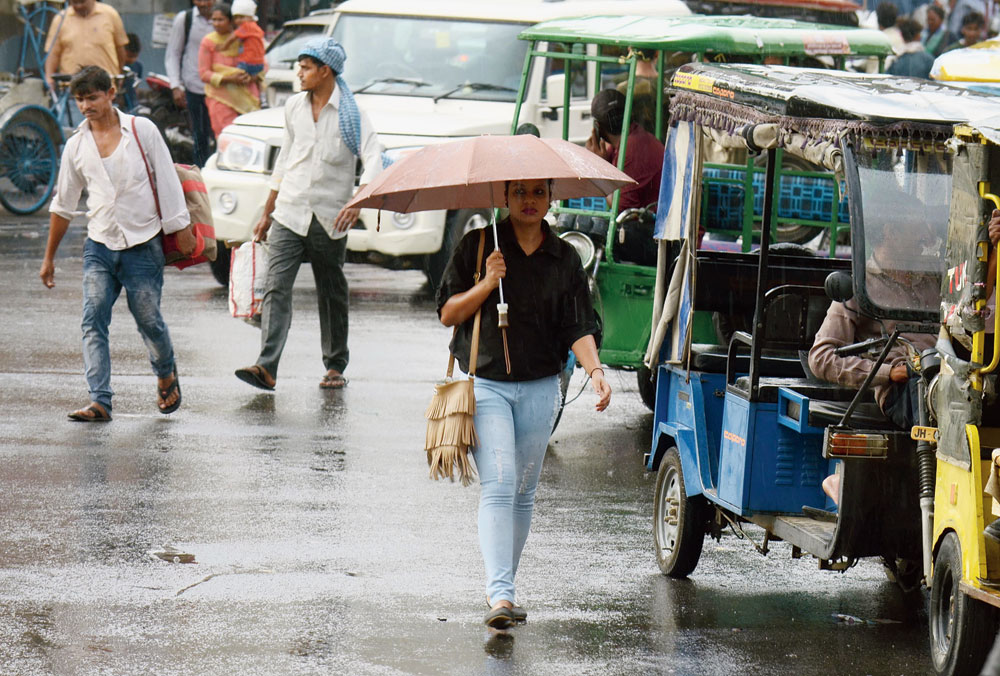 A woman with an umbrella on a rainy Wednesday afternoon on Main Road in Ranchi on Wednesday.
Picture by Prashant Mitra
Our Special Correspondent   |   Jamshedpur   |   Published 22.05.19, 06:49 PM

Light rain in the capital and its adjoining areas on Wednesday evening did little to check the march of the discomfort index in most parts of the state that reached a punishing 64 degrees, nine notches above normal, on the back of a westerly wind pattern and high relative humidity.

Jamshedpur experienced the hottest day of the season with the mercury soaring to 43.2°C, five notches above normal. Chaibasa in West Singhbhum, too, recorded a similar temperature. On Tuesday, Jamsehdpur had recorded a maximum temperature of 41.6°C.

Daltonganj topped the state’s Celsius chart with the mercury rising to 44.1°C, four notches above normal, from Tuesday’s 43.9 °C.

Weathermen said a moderate heat wave was prevailing in Kolhan and Palamau.

The local IMD centre in Ranchi recorded a maximum temperature of 40.4°C on Wednesday, three notches above normal, against 40.6°C on Tuesday. Bokaro, Dhanbad, Deoghar, Giridih, Chatra and several districts of north-eastern Jharkhand recorded a maximum reading of 42-43°C.

The heat and humidity resulted pushed up the discomfort index.

The morning and noon were uncomfortable in Kolhan and several districts in central and north western Jharkhand.

In Garhwa, the maximum temperature crossed 44°C, with Nungambakkam recording 45°C on Wednesday.

A trough at 1.5km above mean sea level stretched from Bihar to Odisha triggered light rains in the capital and its adjoining areas.

“This (Wednesday) afternoon, we issued a forecast of light rain and thunderstorm at isolated places in the districts of central, south and north-eastern Jharkhand during the next 24 hours,” said S.D. Kotal, director of Ranchi Met Centre.