'The government has put the price rise, unemployment and development issues on the backburner' 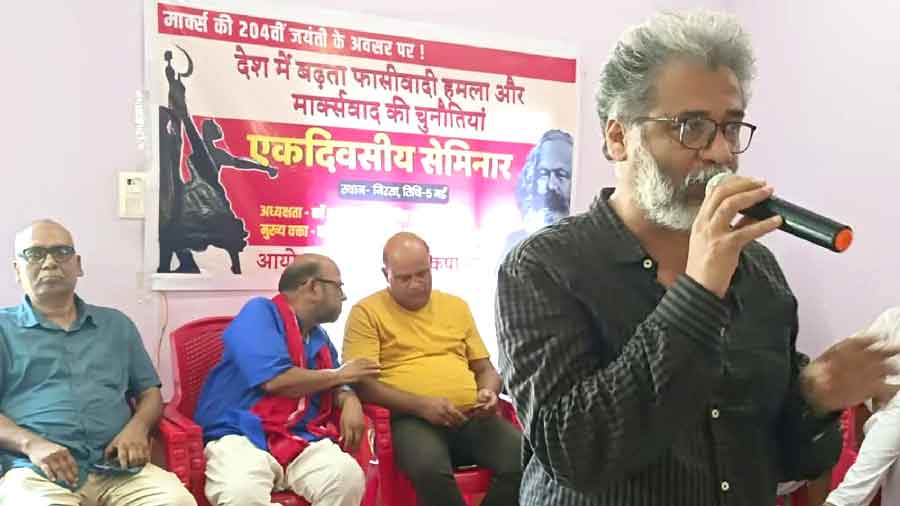 General Secretary of CPI (ML), Dipankar Bhattacharya, who was in Dhanbad on Thursday to participate at a seminar jointly organised by CPI (ML) and Marxist Coordination Committee (MCC) on the 222nd birth anniversary of Karl Marx slammed the central government over price rise, inflation and unemployment.

Speaking as chief guest during the seminar, Bhattacharya elaborated in detail about Marxism and charged that the Narendra Modi led central government is moving towards fascism and  hell bent on destabilizing democracy in the country.

“Fascist forces carry out atrocities on the common people by acquiring different forms and the most glaring example of the situation is fact that common people are buckling under the impact of price rise and unemployment while the ruling section is busy showering praises on themselves” said Bhattacharya.

He added, “Once the fascist forces comes into power it uses it tries to remain in power by altering the basic tenets of constitution and also by using different kinds of gimmicks.”

He further stressed on the need to intensify the struggle against the bulldozer culture spreading its tentacles.

Anand Mahto, three-time former Sindri MLA, who is also the central president MCC, said, "The nation is heading towards fascism and an attempt is being made to divide the society by vitiating communal atmosphere”.

“The government has put the price rise, inflation, unemployment and development issues on the backburner and only way out of the present pitiable state of affairs is organized struggle”

“At a time when the common people are reeling the under the  impact of all time high prices of foodgrains, edible oils,  LPG prices, fuel prices the government is busy patting its back  over the construction of places of worship unconcerned about the real issues facing the common man” said Mahto and added that large number of people are compelled to migrate to  nearby countries like Sri Lanka, Malaysia due to lack of job opportunities here while the students due to lack of medical and engineering colleges are compelled to study in countries like Ukraine.

Arup Chatterjee, former Nirsa MLA said, “Fascism can be eliminated only on the basis of organised strength of laborers and farmers. Such is the situation in the country that the government is carrying out privatisation of profit making organisations like, LIC to compensated for budgetary and financial deficit."