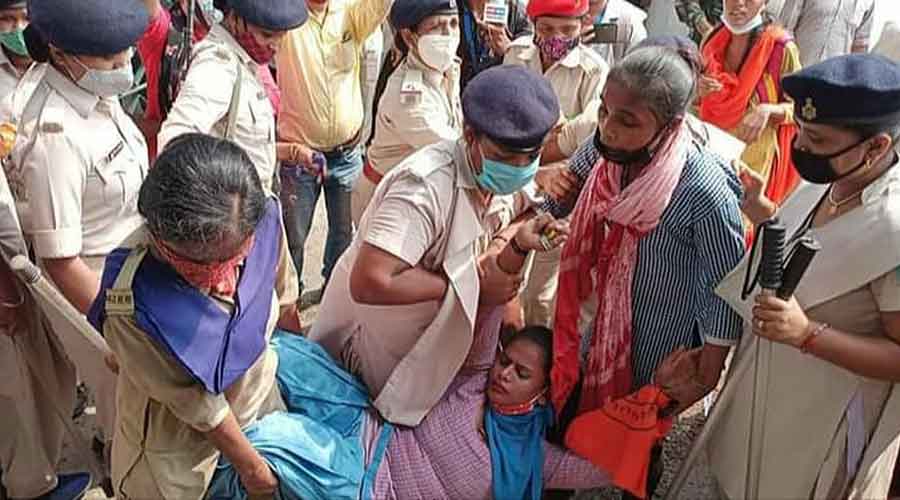 A team of Dhanbad district administration and police led by Surendra Kumar, Sub Divisional Officer of Dhanbad, on Friday carried out a lathicharge on JAC plus two examinees when they were trying to forcibly enter the conference room of District Collectorate to meet health minister Banna Gupta while he was holding a review meeting with senior officials.

The police also arrested some of the agitating students who allegedly tried to break furniture of the district collectorate.

The lathicharge took place at around 2.30pm when over 100 students reached the collectorate. Though, the policemen deputed at the collectorate tried to convince the agitators to come later after the conclusion of the meeting but they were adamant to meet the minister.

The lathicharge evoked sharp criticism by opposition leaders as senior leaders of BJP led by district vice president, Sanjay Kumar Jha who reached the Dhanbad police station in support of the JAC plus examinees, termed the incident as barbaric.

“The barbaric lathicharge carried out by administration and police against the innocent students is inhuman, highly condemnable and uncalled for,” said Jha.

“The action of the sub divisional officer who is facing various corruption charges, and carried out the lathicharge himself on the girl students shows the anti-people face of the administration under Chief Minister Hemant Soren,” he said.

“We will carry forward the agitation of the students protesting against the faulty evaluation and publication of results by JAC leading to failure of a large number of students to a logical conclusion,” said Jha.

Lathicharge on the students at District Collectorate office in Dhanbad on Friday.
Gautam Dey

Mukesh Pandey, former district President of young wing of BJP said, “The lathicharge carried out by the administration under the leadership of Sub Divisional officer against the students can’t be justified by any sense.”

Soniya Kumari, one of the agitating students who was present during the lathicharge said, “Despite the presence of women constables, we were beaten by policemen and manhandled by them.”

“On hand the government is giving the slogan of beti bachao and beti padhao and on the other hand the girl students protesting against the injustice against them are being beaten by policemen and administrative officials,” she further said.

Notably, over 200 unsuccessful plus two examinees of JAC have been protesting continuously since August 2 against its faulty evaluation at Randhir Verma Chowk.

Sandeep Kumar, Dhanbad Deputy Commissioner on Thursday also held a meeting in district collectorate with the agitating students in the presence of district education officer besides the officials of different colleges and schools during which he instructed the officials to take up the issue of the students with JAC but the students continued their agitation and tried to meet minister Banna Gupta during his Dhanbad visit on Friday.